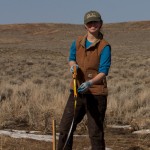 A hearty congratulations to Anna Perry, former graduate student in Gail’s lab, for finally seeing the publication of her first major paper from her dissertation.  Check out the July American Naturalist to see the paper and for links to the supplementary materials.

This project started with questions about using the 2nd generation sage-grouse robots to study how males respond to signals of interest or disinterest from females. Our first robot experiments employed a less dynamic robot and we mainly adjusted the proximity to males rather than the robot’s posture or movements. The newer robots that Gail developed with several engineers (Jose Mojica, Scott McKibben, and Jonathan Tran) were more mobile and could simulate pecking at the ground as well as looking around. We anticipated that these simulated behaviors would trick males into thinking we

The journey of this paper started with Anna planning and supervising a series of experiments on the sage-grouse leks in Wyoming, trying test males repeatedly with the robot expressing more or less interested behavior. She also had to design a study to record the behavior of live female sage-grouse to ensure that the movements we had the robot carry out actually relate to live females (this will be a second paper hopefully coming out soon). But in spite of all the work to conduct these studies in the field, and to work with numerous UC Davis undergraduates in the lab to collect data from the resulting video tapes, this turned out to be the quick part of the project.

Anna realized that to really answer questions about how hard a male was willing to work, she needed to rethink how we talk about the sequence of displays that a male sage-grouse performs on the lek. Rather than simply summarizing numbers of struts or simple rates or averages, Anna worked with Richard McElreath and Dave Harris to formulate these bouts of behavior as sequences with probabilities of either continuing in a high-intensity bout or transitioning out of a bout into a rest period (I’m somewhat simplifying here). To write the code to analyze the sage-grouse display data, as well set up simulated data sets to show this technique offer tangible advantages to traditional display metrics, took several additional years! Yes, years!

The result of all this is a published product that is among the most careful and meticulous I’ve ever been a part of. Way to go Anna! 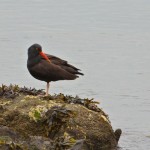 I mentioned a couple of entries ago that KQED Quest came along on the Oakland Christmas Bird Count and produced a feature for their weekly radio program. Well, that feature aired today. You can read the transcript, and also listen to the program using a link at the top of the page. Also note the Oystercatcher and Turkey photos are mine! I thought they did a really nice job. It’s always a surprise what they might include- Andrea was along and recording all morning, so must have had several hours of recordings to support the story. 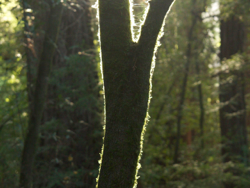 It’s always amazing to me how fast the previous year seems to have come and gone. I hope everyone had a happy, safe, productive, and stimulating 2011, and hope 2012 brings all of this and more good things to you.

2012 looks to be an exciting year, what with another field season in Wyoming- this time with our next generation sage-grouse robots and a larger crew than last year, and hopefully the resolution of several of our outstanding projects from previous years. Also the possibility of attending a conference (the NAOC- North American Ornithological Congress) in Vancouver.

This past weekend was full of birds Birds BIRDS. I once again participated in two of the local Audubon Society Christmas Bird Counts, in central Contra Costa County and in Albany/El Cerrito for the Oakland Count. I’ve explained a bit about Christmas Bird Counts previously including here.

One enduring fact of local counts here seemed to be that the weather would exhibit some daunting combination of at least 2 of the following: cold, wet, or windy. To me, California CBC’s mean trudging out to the end of Albany Bulb, trying to keep my binoculars dry as rain drops pepper my raincoat.

Every once in a while the weather cooperates, and this weekend we had dry and calm conditions (if a little foggy in the morning of the CoCo count). The birds seemed to appreciate it too. Although duck numbers seemed pretty low, we did well, especially on the Oakland count. With Kevin’s great leadership and willing to actually count and look through large flocks of gulls, we ended the day with 110 species! This is all between the bay and top of the Berkeley hills. Possibly the most surprising bird for me were these guys, who were seen right off Buchanan street a few blocks from I-80. 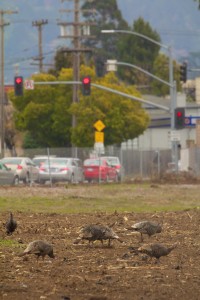 There are always some birds in the bay, and while we missed some that we usually see (Eurasian Wigeon, Red Knot, Blue-winged Teal, some of the other loon species) we still got some of the classic bay birding experiences, such as finding a perched Peregrine Falcon contemplating breakfast choices, or the wheeling, flashing flocks of small shorebirds crossing low over the water. While not particularly helpful for identifying birds, seeing the shorebirds scattered over immense stretches of exposed mudflat at low-tide gives one a sense that the fragile line between land and water here in the bay does provide quite a bit of habitat for many different species.

The upland birds were particularly active in the afternoon. Some counts we get a few pulses of activity, but we did quite well for bird diversity both at the often quiet Albany Hill and the Sunset View Cemetery. Some birds that we saw a lot of, and that were also seen by a lot of other folks in other parts of the count circle, were things like Lincoln’s Sparrows and Fox Sparrows (below). 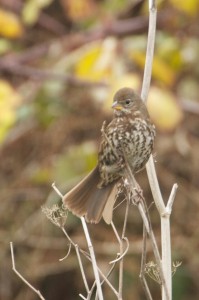 Also a treat was having Andrea Kissack from KQED Quest along with us to do a story on the Christmas Bird Count. Her voice is familiar to anyone who has watched the weekly science magazine on KQED, or listened to the radio or podcasts. She followed along with us for the morning, listening to the process of counting birds. She was also at the countdown dinner to hear the end result and species tally. The program should air in early January.

In the Contra Costa count, our group saw 90 species, and the entire count circle totaled in the 140’s.

We finally completed hiring today for the 2012 field season. Thanks to everyone who applied. It was once again an amazing field of applicants. I haven’t added up how many, but I’m sure over 50, including several from overseas (who we unfortunately were not able to consider). Welcome to the team Becca, Liz, Melissa, and Julia!