Male wild turkeys (Meleagris gallopavo) sometimes form teams of 2 or more males that cooperatively court females and defend female groups against other males. Only one male per coalition was thought to get to mate with females.  Why should subordinate males help their dominant partner?  Watts proposed that these males were brothers, and that kin selection could explain this apparent altruism (kin selection is the idea that evolutionary success can involve not only passing on one’s own genes, but also helping others such as close relatives to pass on gene variants that you share).

Here are two videos showing both the cooperative courtship of males and the defense of females.

Why do males cooperate?

My dissertation research focused on the evolution of cooperative courtship in wild turkeys at the Hastings Natural History Reservation in Carmel Valley, California.  I used microsatellite DNA to estimate the genetic relatedness between males and assigned paternity to offspring in order to measure the reproductive success of dominant and subordinate males in coalitions as well as non-cooperative solitary breeders. I found that kin selection can explain cooperation, since the indirect fitness benefits from helping a close relative more than made up for lost breeding opportunities. Specifically, males are close relatives (average pairwise relatedness of about 0.4, which is close to what you would expect for full siblings and more than you would expect from half-siblings). Dominant males with the help of a subordinate fathered roughly 7 times more offspring than solitary breeders without any help. Plugging these values into Hamilton’s Rule, (rB – C > 0 for cooperation to evolve, with r = relatedness, B = the benefit to the dominant, and C = the cost of lost solitary reproduction), we come up with a net benefit to the helping behavior. You can read the fully story here. This is one of the few cases where we can fully parameterize Hamilton’s inequality and find a net benefit to cooperation.

Moreover, I found that current direct fitness benefits and delayed fitness payoffs were unlikely to account for cooperative courtship in this species. This point becomes interesting when we contrast turkeys with other birds with cooperative male displays. Neotropical manakins in the genus Chiroxiphia have teams of alpha and beta males that coordinate elaborate songs and dances for females. Research by David McDonald and Emily DuVal have shown that these species tend not to be related, only the alpha male gets to mate, and subordinate males benefit through a higher likelihood of ascending to the coveted alpha spot. Another species, a lekking shorebird called the Ruff (Philomachus pugnax), finds white-morph males settling next to territory-holding males. In this case, both morphs get to mate. I see this as an excellent example of convergent evolution. Cooperative courtship has evolved at least 3 times in these lek (or lek-like) mating systems, but benefits for subordinate males are quite different in each case. Emily DuVal and I expand on this in a recent book chapter devoted to cooperation in lekking birds, and we’ve tackled a broad review of male-male cooperation with Eileen Lacey and Samuel Diaz-Muñoz. 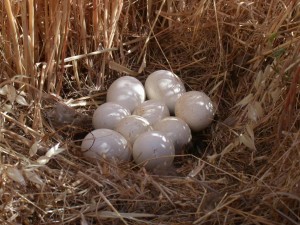 Given the importance of relatedness for male turkeys, I wished to see where relatives were distributed in the population.  Using parentage information from the Hastings population, I compiled the first description of the genetic mating system of wild turkeys.  Approximately half of nests were due to a single mother and father.  Females often mated with multiple males; I also found evidence of conspecific brood parasitism (multiple females laying in the same nest).  In spite of some nests containing unrelated offspring, the vast majority of nests were sufficiently related to favor cooperative courtship.  I also examined spatial patterns of maternity and paternity, and found little evidence that offspring in nearby nests should be more closely related than random expectation, although my limited within-year sample sizes make this conclusion tentative. This work, and the opportunity for selection work below, can be found in a 2008 paper in Condor.

Opportunity for Sexual Selection: Selection is driven by differential reproduction– some individuals reproduce more than others, so the genes carried by these more successful individuals will tend to become more common over time.  We can learn even more about how selection may be acting by breaking up the total variance in reproduction into it’s component parts. I employed this approach with the Hastings wild turkey population.  First of all, I was able to confirm that the opportunity for selection is stronger on males than females (hardly a surprise given the elaborate ornaments on the male as well as the lek-like mating system).  When considering three factors of male reproduction, the number of mates, the number of eggs those mated females laid, and the proportion of those eggs the male sired, the number of mates explained the most variance in male reproduction.  Somewhat surprisingly, the share of paternity was also important- in spite of the lek-like nature of the turkey mating system, sperm competition and/or mate guarding may be important male strategies. I’ve collaborated with several other evolutionary biologists to discuss the utility of opportunity for selection metrics.

Kin Recognition Mechanisms: How and when do Coalitions Form?

Organisms can use a variety of mechanisms to recognize kin; however determining which mechanisms are operating often requires experiments to remove or modify specific cues available to individuals.  I employed a novel approach to use patterns of offspring relatedness to test hypotheses about when and how male turkeys might form these partnerships.  I found that if partnering decisions occur after broods had merged into multi-brood creches, males would have to be able to directly assess genetic relatedness (e.g. use phenotype matching) to reliably partner with relatives.  However, partnering at the nestmate stage could be accomplished either with direct assessment or use of a contextual rule-of-thumb.  I developed a model similar to value of information models and found that at this stage, and assuming no differential cost to the various recognition mechanisms, direct assessment would confer a small fitness benefit, but that rules-of-thumb could be advantageous given even a small error rate in assessment accuracy.