My own interest in science is due in large part to the inspirational teachers I had throughout the years, as well as the good fortune to participate in a wide range of research projects in high school and college. I am grateful to be able to provide similar opportunities to students. I have led several classes in animal behavior and ecology, and have ensured rich and meaningful experiences through use of exciting media, hands-on inquiry-based activities, and interaction with professional scientists.

I have a strong commitment to supporting diversity in the sciences. As an instructor, I make sure that assigned readings and in-class examples reflect female scientists and scientists of color. In lecture, I also include short videos of scientists from different backgrounds describing their research in their own words, so my students see more faces than just mine advocating for the field.

I have incorporated a strong mentorship component into my own research. Many current students and recent undergraduates have conducted a variety of field and laboratory-based projects with me. More than 10 undergraduates are co-authors on publications with me. 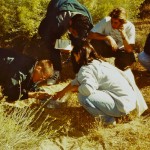 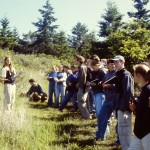 Supervising  and Training of Field Assistants

Supervising and Training of Lab Assistants

Supervising and Training of Teaching Assistants