Spring has sprung! Birds are singing, flowers are blooming, the poison oak is nice and juicy. Pop a Claratin and get out there! Lots of birds to feature in this update. 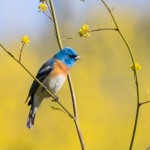 NEW ARRIVALS: Who’s new to the neighborhood? As the vegetation on the hillsides matures, we’ll get some fresh birds in the open areas before the month is out. There should already be lots of red-winged blackbirds making homes of the taller weed patches, but look and listen for a couple of other species. First is a small finch-like bird called the Lazuli Bunting singing from the edge of fields or the middle of mustard thickets. Male Lazuli Bunting have coloration reminiscent of a bluebird with the saturation slider cranked up to 11, electric blue head and back with a rusty swatch on the sides and breast. They repeat their cheerful song frequently – it bouncing quickly along in a series of notes that can be repeated in pairs. These are definitely one of my favorites here in the canyon! 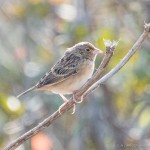 The other grassland bird I’ll highlight here, the Grasshopper Sparrow, often falls into the ‘seen but not heard’ category. If you are hiking in the open areas of the park, for example above the Belgum grove or along the lower reaches of the Mezue Trail, listen carefully for a long, even, insect-like buzzy trill emanating from the slopes. The sparrows themselves tend to be hard to localize and spot. My best advice is to check distant shrubs for little brown birds on top. The pretty patterning won’t be visible unless you get a close look. 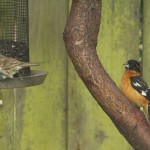 We also welcome back a colorful bird that might be familiar to those of you with backyard bird feeders, the Black-headed Grosbeak. These stout-billed relatives of tanagers and buntings are striking to look at, with bold blocks of black, white, orange and yellow in males and broad stripes on the head for the females. Their song resembles a loud robin song, swinging up and down in pitch through variable phrases, but with notes that are more staccato and more impatient rhythm. Listen for them in the tree tops in the canyon and your neighborhood. 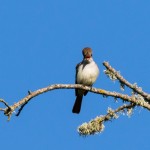 With Spring comes more insects, and with those come more insectivorous birds. Flycatchers are one such type, they comprise a sprawling collection of species that mostly share a hunting style – making short flights from perches to catch insects on the wing. We have resident species (Black Phoebe) and wintering species (Say’s Phoebe) but most of the flycatchers we meet here are migratory birds who show up to have their families here. The Ash-throated Flycatcher are Personality Plus, loudly announcing their presence with “BrrrReeeeep” calls and sporting a punk hairdo. Ash-throated Flycatchers nest in boxes or tree cavities much like bluebirds and you often find them along fences, scrub, and forest edges.

At the tinier end of the spectrum is the Pacific Slope Flycatcher. Pac-slopes are not much bigger than a warbler. You may see these in the forest, perched on a branch bobbing their tails and broadcasting their abrupt “Ptik” call. Look for their teardrop-shaped eye ring that’s slightly wider towards the back of their head than towards their beak. Pacific Slope Flycatchers are members of the genus Empidonax which are notoriously hard to identify even for seasoned birders. They are the only one we commonly see here in this close to the Bay, but several other species are possible especially during migration. Telling them apart requires a good look at their shape, color, behavior, and ideally, a description of their call.

WINTER BIRDS ON THE MOVE: Time to say goodbye to more of our friends. Most of our wintering sparrows will head out this month, led by our Sooty Fox Sparrows, followed by White-crowned and Golden Crowned Sparrows. The Golden-crowneds all breed in western Canada and Alaska. The White-crowneds make a much more complicated patchwork of resident and migratory populations with California migrants traveling to the Sierras or up the coast and even all the way up to northern Alaska. We are just on the edge of the range for some of the resident populations (apparently there are some in the scrubby areas of Hillside Park in El Cerrito, along with some spots closer to the bay and coast), so it’s not completely out of the ordinary to find one here in the spring or summer but for most of us in this part of the bay we won’t see them until the migrants return it the fall. For now, just enjoy their last days here as they sport their fresh breeding plumage and zip around full of vim and vigor.

Other woodland birds heading out soon include the tiny Ruby-crowned Kinglet and the Hermit Thrush. As the Hermit Thrushes leave, their cousin the Swainson’s Thrush will arrive from the south, but that is a story for next month…

OUTSIDE THE PARK: There is no bad place to bird right now! As I mentioned in the March update, this is the perfect time of year to check out parks and trails in the interior East Bay.

Need an excuse to get out? April 10th is the San Francisco Bay Bird Observatory’s Photo Big Day. This is a fundraiser for a bird research and conservation organization on the Peninsula. The special theme for this event is “color”, either pictures of colorful birds or birds with a colorful background. For more information visit https://www.flipcause.com/secure/cause_pdetails/MTEwNjMx

Stuck at home? Golden Gate Audubon Society, one our local chapters, has some classes and virtual field trips. Many of these are also important fundraisers as part of the GGAS Bird-a-thon. Visit https://goldengateaudubon.org.

(This essay was originally posted on NextDoor)