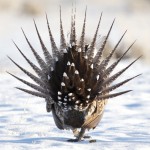 In spite of the painful adjustment to getting up hours before sunrise, the past few days have been a fun introduction to the world of the lek. At this point in the season, one of our highest priorities is to get photographs of the males’ tails during display- we use these to help identify each male based on the spot pattern (we call them “buttprints”). We recognize these patterns from our distant overlook hills with a good spotting scope*, and it is possible to get pictures of these with a point and shoot camera or cell phone using the scope. However, we typically take the photos from much closer. It is easiest to do this from the edge of the lek, which means relatively close encounters with the birds. Even our technician who has worked with sage-grouse before hasn’t gotten to see the lek behavior up close, so watching the struts and fights, hearing the grunts, pops whistles, and swishes, is a real treat. 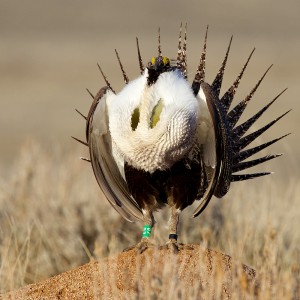 Male helpfully displaying his bands from atop an anthill

Sage-grouse, like most birds, molt their feathers at least once per year. What this means for us is that the buttprint patters we use are only valid for one season, and the next year when the male shows up on the lek, he will have an entirely new pattern. Fortunately, our increased attention to catching and banding the males means we are starting to be able to follow males across years as well. For example, we caught one male “Steve”** in his first year on Chugwater, watched him establish his territory and return for several years, all apparently without mating with a female. This year we’ve had a good number of returnees already from last year’s captures, including males on both Chugwater and Cottontail that yielded a lot of behavioral data last year.

Encounternet male leaving lek- note the antenna extending from his lower back.

While we have had good success finding banded males, our resighting of birds with radiotags seemed less encouraging at first. Several encounternet birds returned but did not seem to have tags, and we were worried that our Teflon harnesses might be prone to falling off sometime during the off season. Eventually we got close up photos during the process of taking pictures for buttprints, and started seeing the antennas sticking out. The good news is the harnesses are still on, and that the males survived and are behaving completely normally. If there’s a cause for concern, it is that after molt, the feathers on the back are going to impair the solar charging of the tag. New tags we put out this spring will work fine this spring, but maybe not as well for subsequent years on the bird unless we can capture the bird again and tuck some feathers under the harness. 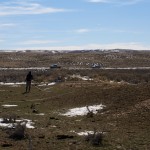 Along with identifying the birds, we are moving forward with data collection. If buttprints are Step 1, then getting the grid of survey stakes is Step 2. As the weather warmed and the snow melted, it was easier to get to Chugwater Lek, so that was our first target. The key is not only to get the uniform 10m spacing of stakes, but also to make sure the stakes are arranged in a way that makes hill observation and data collection from the video as easy as possible. Once we get the first square as square as possible, then it is easy to build out from that by sighting along the rows of stakes, checking 10m spacings as we go. Chugwater always seems to be really muddy when we lay out the stakes. The road to Cottontail was pretty bad, and we didn’t make it down until yesterday. Cottontail Lek is much bigger, and we ended up with probably ~100 stakes in the grid there! 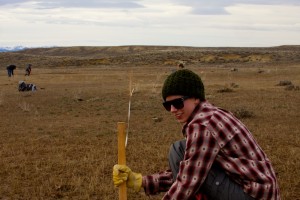 Finally, the crew is starting to get used to the spatial mapping of the birds. We all went up to the Chugwater overlook once the grid was up to practice. Our “base” data collection is therefore in place- pretty happy to have that done relatively early in the season. Next up will be setting up the microphone arrays, capturing some birds and getting the position and movement data from encounternet, and hopefully some early-season robot experiments to form the basis for understanding seasonal changes in effort. 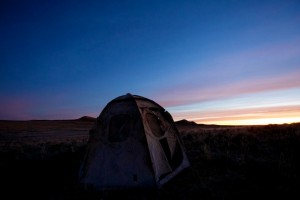 Chugwater hill blind at dawn, waiting for the stakes and birds to become visible. 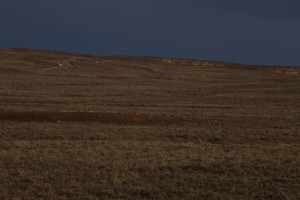 * We have had very good luck with Alpen brand scopes. Very nice quality for the price.

** In the field, we name birds based on their tail feather patterns, or other silly names. This seems to make learning the birds much easier on the field technicians. When our undergraduates collect behavior data back in the lab, we only refer to them by their number, so there’s no chance of biasing our data collection based on the name the male was given. Also, we have not seen Steve yet this year.