We’ve now been out in Wyoming for about two weeks as part of our Sage-Grouse research, and our great crew of technicians has survived their first week. We are still in the early-season set-up phase. Over the past few days we have been making good headway on a couple of important tasks. 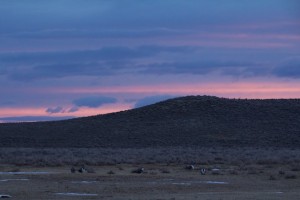 Sunrise at Cottontail Lek. You can see several male Sage-Grouse displaying in the foreground.

The male sage-grouse seem to be getting in gear for their breeding season; we’ve seen them coming into all three of our research leks (Monument Lek, Chugwater Lek, and Cottontail Lek). This has allowed us to make sure the main display areas are in the same place as they were in past years. The same general lek site can be used over decades by many generations of grouse, but sometimes the exact area used by the birds may move a little.

Putting in stake B3

Once we have a good idea of where the birds will settle, we are ready to place our overlook observation blinds and also set up our grid of survey stakes on the lek surface. The stakes help us map out where males are displaying, in effect giving each male an address we can use to find him later on our video tapes of the morning’s activities. We’ve been doing this for several years and the males have never seemed wary of the stakes.

Actually setting up the grid of stakes is definitely a team effort, and always one of the first big jobs of the field season. We use long measuring tapes to try to get the spacing as accurately as possible. Typically one person holds the tape to check distance and alignment, and another person hammers in the stake. With two or three teams of two, this goes reasonably fast. We even had some nice weather on Monument Lek.

So how do we identify the males? We’ve banded a few (in fact, we’ve already resighted some males with color bands that were captured in 2011). However, most of our males are identified without ever laying a hand on them. When males display, they raise and fan their tail. This exposes their undertail coverts, each of which is tipped with white. Each male has a different arrangement of these (instead of a fingerprint, we call it his ‘buttprint’). The trick is to get a photograph of each male while he is facing away in display- we can then compare the photographs, and even take the photo into an image editing program to convert it to a simple black and white pattern.

These are some photos taken this morning on Cottontail Lek- see if you can tell these males apart. 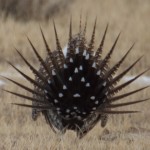 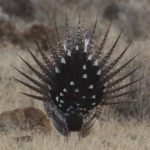 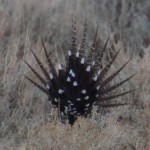 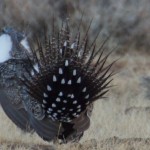 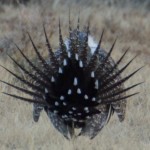 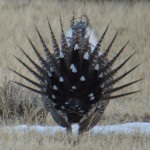 Biologists use differences in appearance to identify all sorts of animals, from whales to tigers to wasps. Hannah, one of our field techs on the project, has introduced us to some software that has been used to help sort out individual photos of various mammal species. She’s been using it on some large African animals. We’ll see how it works with feather patterns.

With stakes and ‘buttprints’ we know who a male is and can describe where he is. These are both requirements for our research questions involving how males interact with other males and how they court females.