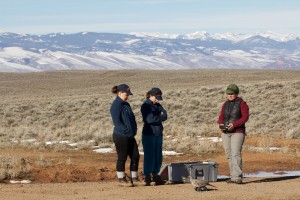 An early visit from our collaborator Jen Forbey and a few other members of her lab should have been exciting enough for early March at our camp. Jen has been looking at the interactions between grouse and sage- basically how sage nutrition and chemical defenses affect grouse physiology and foraging behavior. Her visit was for some mutual training possibilities. Her graduate student Marcella has a lot of trapping experience, and was able to show us a new spotlighting technique that we’ve now adopted. It’s an “on foot” method, where birds are first seen from a truck driving on an established road, then a pair of people walk out to the bird, one with the spotlight and a portable speaker blaring music, and the other close on their heels with a net. We trained Marcella on our video and buttprint protocols, and also got her going with a recording unit to get some recordings from her Idaho population. The Boise team also completed sage-sampling at three leks to look at forage quality surrounding these display grounds. Jen and her crew were fun even when we were squeezing 13 people in to the trailer for dinner! 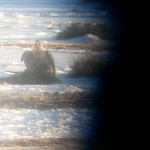 I mentioned some excitement. First was the once-a-decade (or more) visit of a large arctic falcon called a Gyrfalcon to Cottontail. Sean and James got some digiscope photos of a falcon that we initially assumed was Prairie Falcon, but further review of the images suggested it might be the larger Gyrfalcon. Not only did they see it, but they saw it make several passes over the lek before finally killing and eating a male sage-grouse! Sadly it was a male who was already a favorite- named Roundasaurus Leks due to his buttprint looking like the head of a T-Rex. We almost never see predation events on the lek, and to see one so early in the season, and by such an unexpected predator, was pretty mindblowing.

The gyrfalcon came back the next day and James and Sam were able to get some more diagnostic images from a zoomed in video. Unfortunately it hasn’t been back since then, and I haven’t gotten to see it yet. Maybe I shouldn’t say unfortunately, since this bird seems pretty capable of reducing our sample size in a rapid manner!

Jen and her technician Brecken dissected the unlucky male grouse to see what it had been eating (all sage, in spite of the presence of some forbs and insects during the warmer days). I’ll probably have more about that in a subsequent post. 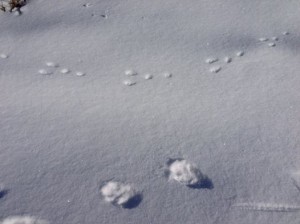 Second: another wildlife sighting. Jen and Gail were at Monument Lek and noticed the burrow and tracks of Pygmy Rabbit! This is another sage-specialist that Jen studies, so she knew what to look for. In some places this is a threatened species. I’m not aware of it’s status in our neck of the woods, but neither Stan nor Sue our agency contacts were aware this species resided in the Hudson area so we will count this as a cool discovery.

Last was something exciting but not quite as fun. I tried to take the crew and Jen’s crew down to the Monument Rocks for a quick but fun excursion. There was still some snow on the road, but not enough to be a problem. Or so we thought. Maybe a half-mile past the lek, the snow covered up what turned out a treacherous mudhole. Trying to power through it only succeeded in me getting astoundingly high-centered. Day 1 we tried using the ATV to help pull it out, but the truck didn’t budge at all in spite of an hour or two of digging. Next morning, we tried another pick-up, but still no budging. It wasn’t until we’d deployed two jacks and dug almost completely under it, and then used the truck, that we finally got it out of there. Definitely not how we wanted to spend two days. 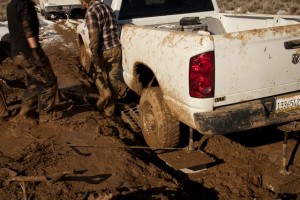 It took quite some feats of engineering to get the truck out.