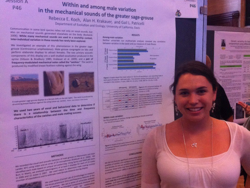 Becca at her poster

I can’t believe it has already been two months since the behavior meeting in Bloomington, Indiana. I think everyone considered it an extremely successful meeting. There were somewhere in the neighborhood of 1200 people in attendance, which is at least twice the size of a typical meeting in this field. The contingent from the IEC added more european flair than you might normally find at the primarily North American Animal Behavior Society conference.

There was a strong lab contingent from the Patricelli Lab. Teresa’s work was featured in the Allee competition- the prestigious student paper presentation that is one of the hallmarks of the meeting. Her work on environmental cues and signaling risk in scrub jays was well received, and maybe I’m biased, but stood out as really novel among the other talks I saw. Great job, Teresa! Conor’s talk on yellowthroats was fantastic, and his talk was well attended in spite of being on the very last day.

We presented two posters on the sage-grouse work. Becca put together a fantastic poster on her work on the mechanically-generated swish notes in the sage-grouse display. She was, I think, the first undergraduate student in our lab to present at a national meeting. I hope she will be an example to more students in the lab: if you have the motivation and time, you can definitely come out of school with a research product you can be proud of. I also presented a multi-authored poster on lateralization of behavior in sage-grouse. We combined data from how males aim during courtship and how they face during aggressive interactions to see if there are any side-biases in how males orient during these social interactions.

Both posters are up outside of our lab on the 2nd floor of Storer if any Davis-ites want to take a look.