Another in my series of posts on local birding in the Richmond hills, originally published on NextDoor.

It’s been a strange spring. My impression is that it’s been a poor migration this year. Some of the birds I mentioned in the April update haven’t really put in an appearance yet. Between last year’s fires and this year’s extreme drought, I don’t think we should expect a normal year. But maybe they’re just late? This past week seems to be ushering in a lot of new birds to the hills. As Emily Dickinson wrote, hope is the thing with feathers.

NEW ARRIVALS: Hopefully lots! As I mentioned above, if you haven’t yet seen “my” April birds like Lazuli Bunting or Ash-throated Flycatchers, they should be pulling into town now. 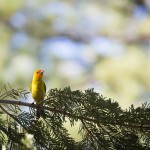 Some of the pass-through migrants are also making pit stops. Within the past week I’ve seen Western Tanagers, Hermit Warbler, and Yellow Warbler.  These birds spend the winter south of us and are just on their way north or to the higher mountain areas to breed. If you enjoy the excitement of finding birds that only put in a brief appearance, these are for you! Also appropriate for fans of the color yellow. Western Tanagers slightly larger than a bluebird with a stout bill. They range from dull to brighter yellow, with the males also showing a bright red face or head. Hermit Warblers show a stunning pure yellow face, males adding a rich black throat for good measure. And Yellow Warblers are pretty much yellow all over, with some reddish streaking on the breast in the males. Your best bet is to check the tree canopies for birds foraging for insects. 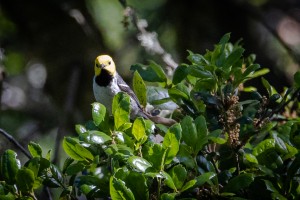 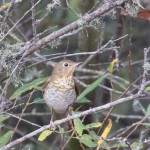 Also listen for Swainson’s Thrushes in the wooded areas. These birds have now replaced the very similar looking Hermit Thrush (Swainson’s are a shade paler and grayer, usually with slightly lighter chest spots and if you get a good look at their face, a light bar in front of their eye kind of like the nose piece of a pair of spectacles). Their song spirals up in a rising series of flute like notes. I most often hear these towards the bottom of the canyon, and at least right now, the earlier in the morning the better.

Of course, late spring and summer are about more than just the new birds on the block. It’s family time! Species that got an early start may already be out and about with their broods. Listen for noisy flocks of chickadees, titmice, and bushtits. Woodpeckers will be shuttling back and forth to their nest cavities. Owlets may be branching out from their nest. Fledgling birds are like teenagers, always hungry. Their begging calls may be unfamiliar as they transition from nestling peeps to adult calls, but their faces are usually giveaways since they often sport vestiges of the bright yellow or orange “lips” (bill coloration) that helps parents see where to aim their food.

WINTER BIRDS ON THE MOVE: Most of our wintering birds should be gone. One that’s still here (and singing!) is the Townsend’s warbler. Other exceptions include some of the more nomadic species that rarely if ever breed here, things like Pine Siskin, Cedar Waxwing, or Red Crossbill. For the rest, you’ll need to wait until the fall migration picks up towards the end of the summer. 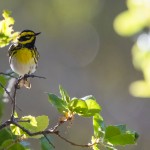 OUTSIDE THE CANYON. Although the hills are drying out quickly, there’s still time to head to interior Bay Area/east county sites to catch the breeding birds there.

For birds at least, our parks along the Bay are going to get less and less exciting for the next few months. Waterfowl and shorebirds numbers are mere fractions of what they are in the fall and winter. That’s not to say there aren’t interesting birds still around. Maybe you’ll come across an endangered Ridgeway’s Rail, or a Least Tern up from the breeding colony in Alameda, or an American Avocet in its breeding plumage. Also look for Ospreys ­– many are nesting now and their growing chicks will need a steady supply of fish. And who doesn’t love watching a bright white Snowy Egret shuffle along the shallows looking for food.

Maybe it’s time to go farther afield? Bring your binoculars when you head to the Sierra Nevadas and say hi to some of our winter friends, and meet some new birds like Cassin’s Finch and Evening Grosbeak. Or sign up for a whale watch and be amazed by the long-winged shearwaters and albatross that lurk just off shore.