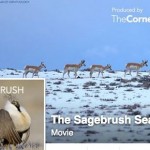 We are back from our field season in Wyoming! I’ll recap our season soon, but first wanted to post an announcement for a great PBS Nature program airing this week. The Cornell Laboratory of Ornithology produced a beautiful film about the sagebrush ecosystem called The Sagebrush Sea. Much of it was filmed in west-central Wyoming near our field site (although I’m not sure any shots from the Hudson area made it in the final cut). One of the producers is Marc Danztker, a collaborator who got his PhD with long-time sage-grouse biologist and eminent behavioral ecologist Dr. Jack Bradbury. It was Marc who first set up a microphone array on a sage-grouse lek– he did so in order to measure the odd acoustic directionality of some parts of the sage-grouse display. 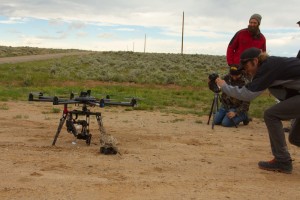 The crew of "The Sagebrush Sea" visit chicken camp (2014)

The program got a write-up on the Nature Conservancy’s blog Cool Green Science, written by none other than Lander biologist Holly Copeland. Holly has become a great friend to Chicken Camp. She and her husband both came out to help trap sage-grouse, and they’ve hosted our entire crew for a bbq for the past few years. Holly also does important work on land-use issues related to the sage-grouse and is currently on Wyoming’s Sage Grouse Implementation Team tasked with revising sage-grouse protections using the best science available to help keep the birds’ populations as strong as possible and off of the endangered species list.