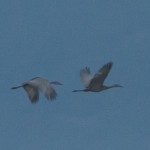 Of course, the biggest part of the workshop was getting out to appreciate nature sounds! We were fortunate to have great weather for the morning recording sessions- the heat didn’t really take over until late morning when we were mostly done.  For more about the sessions at the field station, check out Part 1. 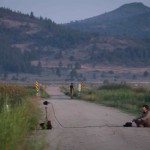 Eric listening to the dawn chorus

The first full day saw us waking up at 2:45AM to drive from the field station to Sierra Valley on the other side of the pass. Our caravan parked along a gravel road in a marshy area at about “nautical twilight”- that time before sunrise when the sky lightens enough to accurately discern the horizon line. We spread out along the road as the eerie pulsing “winnow” of Wilson’s snipe sounded out of the darkness. Gradually the sky became lighter, and we were treated to a whole range of sounds including bullfrogs, sandhill cranes, 3 kinds of blackbirds, meadowlarks, cows, and one of the most powerful and prolonged coyote chorus that I’ve ever heard. I can only speak for myself, but it took every ounce of restraint not ruin 18 people’s sound recordings by yelling “Holy crap that was amazing!” (we were specifically warned not to do this the night before) 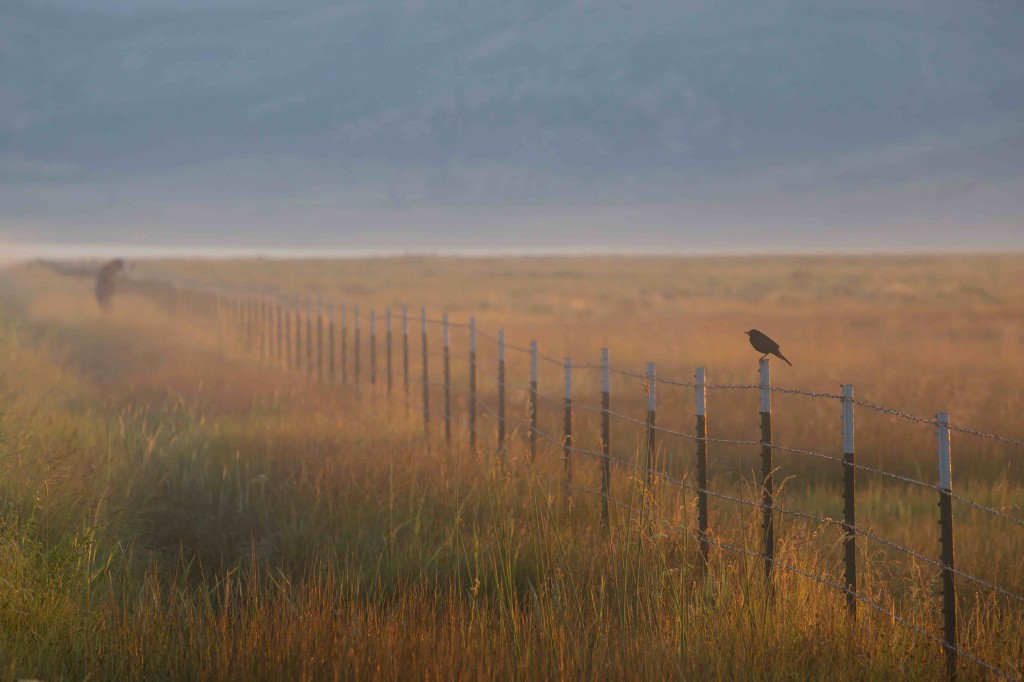 A Brewer's Blackbird pauses on a fence line in Sierra Valley

Our next stop was a one-lane bridge a little farther up the road. The bridge hosts a large colony of cliff swallows, so we were treated to the sights and sounds of hundreds of swallows darting and wheeling around us. 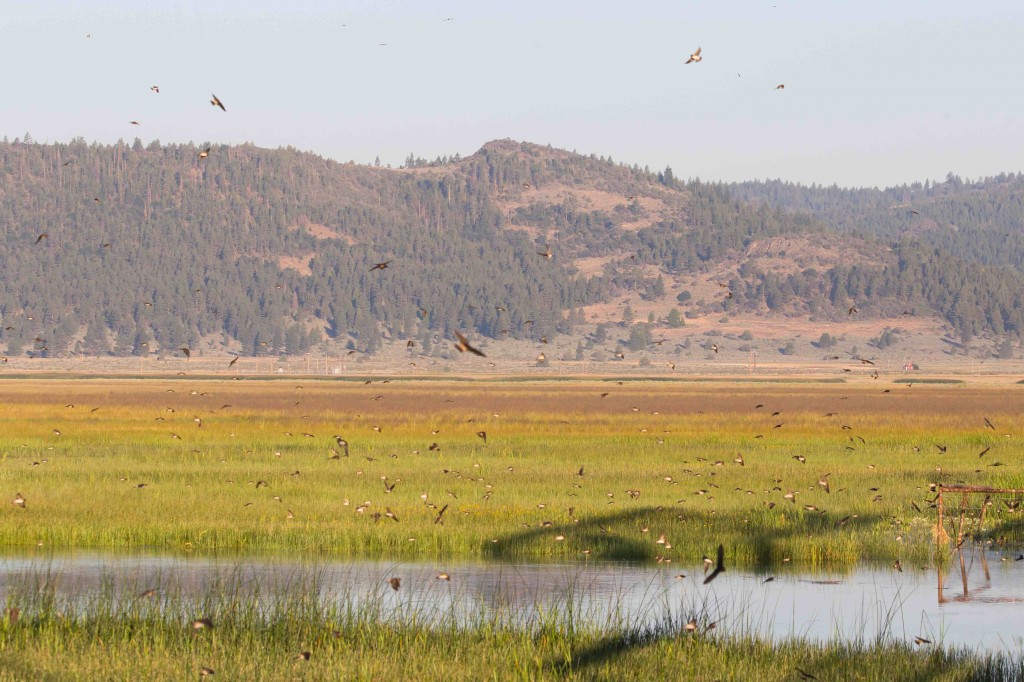 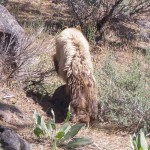 After a quick stop to eat (coffee, breakfast sandwiches, fruit, homemade muffins and granola- the organizers spared no effort to keep us happy and powered up!), we headed to a forest meadow site called Carmen Valley. It was getting hot and summer insect sounds started to replace bird vocalizations before too long, although we did see some of the typical Sierra Nevada birds like White-headed Woodpecker, Lincoln Sparrow, and Mountain Chickadee. Most exciting was surprising a young bear with unusually blonde fur. The bear was definitely more scared of us than we were of it. 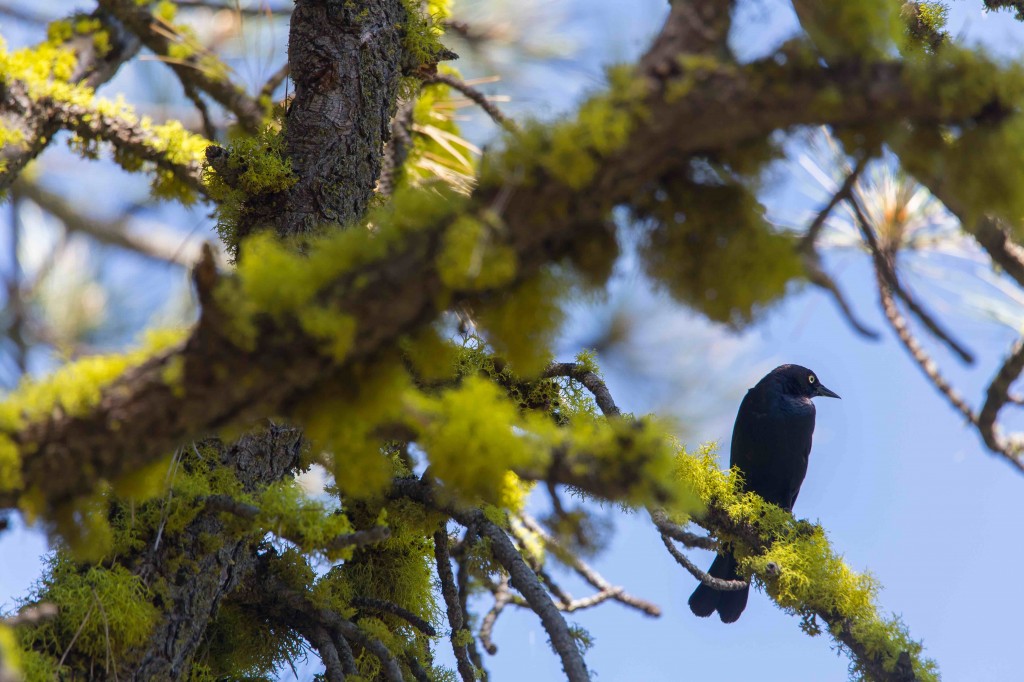 The next morning we woke up at the leisurely hour of 3:15 AM to check out the dawn chorus at the Yuba Pass summit just a few miles up the road from the field station. The mosquitoes finally found us up here, but even so, it was well worth it to hear the forest come alive. There’s not much that beats hearing the ethereal flute-like song of hermit thrushes in a towering forest or the sounds of a sapsucker’s drumming echoing among the trunks. It was also a treat to see several flocks of Evening Grosbeaks along the side of the road. 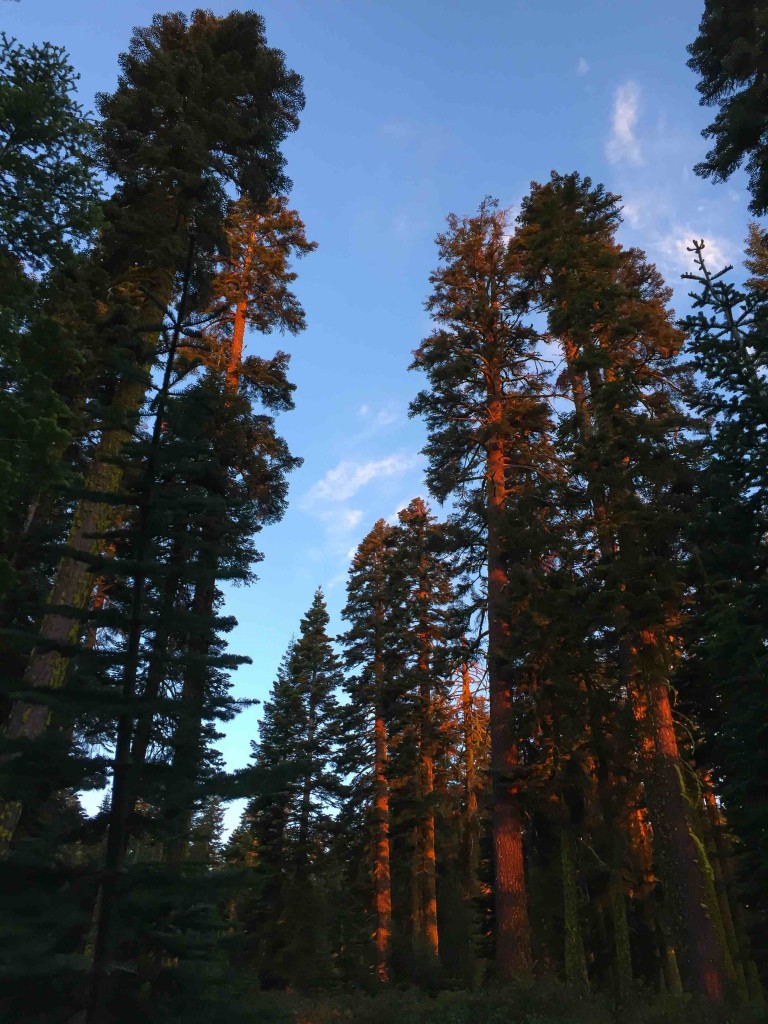 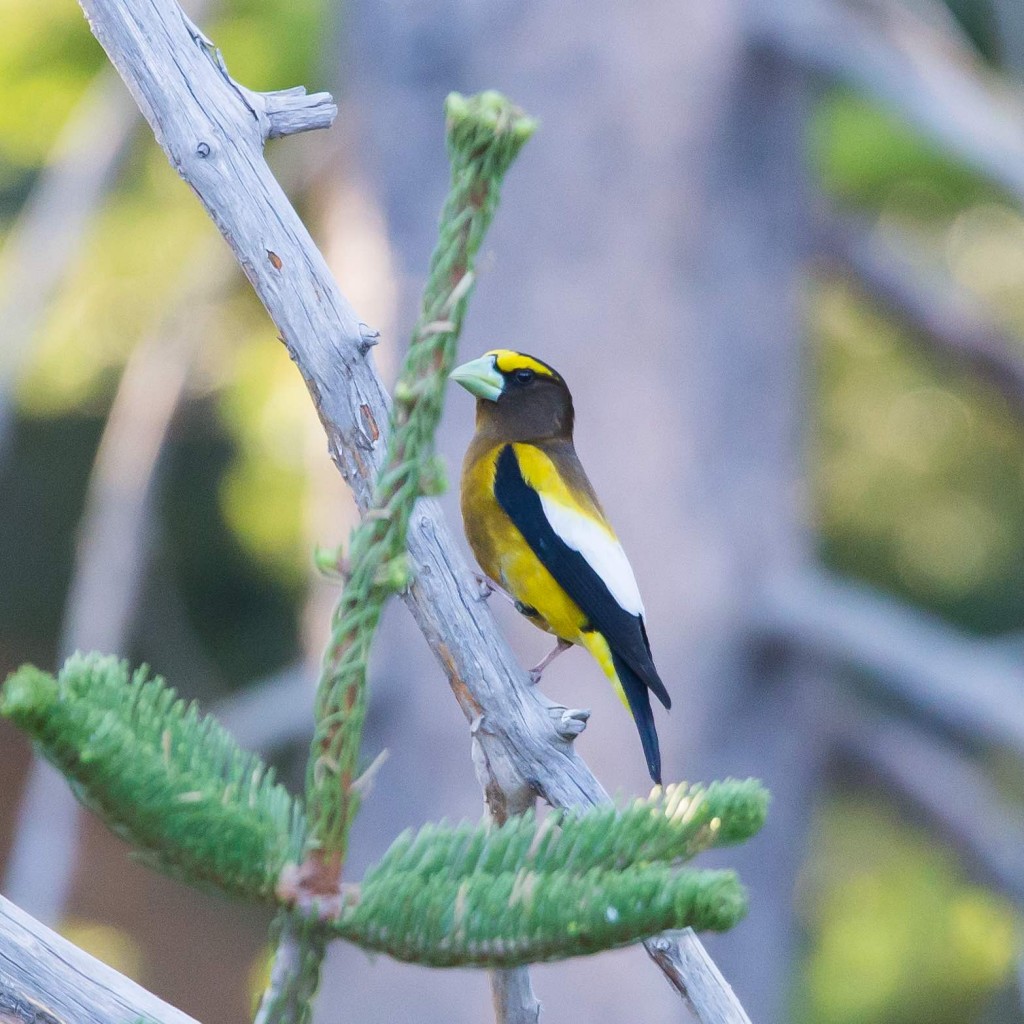 Beautiful scenery, great wildlife, and intellectual and aesthetic stimulation. What could be better than that! I definitely hope to return one day, and would recommend others with similar interests in nature sounds and soundscapes to check out the Nature Sounds Society and the field recording workshop in particular. 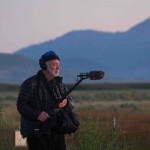 I’ve spent a decade recording sage-grouse pops and whistles, and yet this weekend I felt like a novice. And that’s a good thing! I had the amazing good fortune to be invited to give a talk at the 2017 Nature Sounds Society Field Recording Workshop. This was one of the first times I’ve gotten to interact with serious nature recordists. I’m talking about people who sweat the details of getting the gear and technique right to capture what it feels like to be somewhere else. I’ll freely admit that I’m much more of a data collector, and it was wonderful to spend time with these folks who seem to bring together the best parts of aesthetics, technology, and love of nature.

The workshop, the 33rd of its kind, was held at the Yuba Pass field campus of San Francisco State University (north of Truckee, California). This is a gorgeous field station nestled among towering pines near a rushing river in the Sierra Nevadas. We slept on surprisingly comfortable cots in large tents on raised platforms. Meals and lectures were held in a 2-story main building where our class would mingle with other station users and staff. We had, in my opinion, a perfect combination of amenities: Hot water– Check. Flush toilets– Check. Cell service– Not Available. 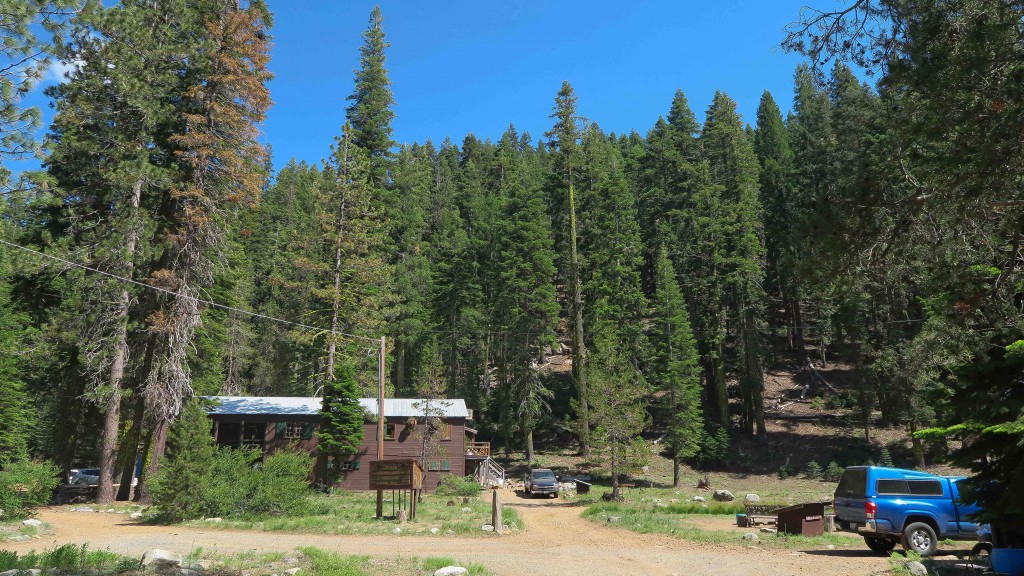 Looking up at the Yuba Pass Field Campus

In the evenings, organizers Dan Dugan and Sharon Perry along with tech consultants Greg Weddig and Steve Sergeant helped us test our recording gear to prepare for the next morning. We were also invited to test out and borrow spare equipment. Mauricio Shrader, a birding-by-ear instructor, provided helpful tutorials, on what to listen for while out in the field.

For me, it was really valuable to hear so many perspectives on nature sound recording. Steve Seargent led a roundtable discussion about how best to set up a relationship with a state or national park and provide valuable services in documenting their soundscapes. Jim Metzner, host of Pulse of the Planet, shared several enchanting clips from his decades of travel and interviews, and gave his perspective on what it meant to capture an audience’s attention and imagination with sound. I spoke about the role of sound in sage-grouse biology and conservation.

As someone who last shopped for audio gear more than a decade ago, the hands on demonstrations were particularly interesting for me. Dan, Greg, and Steve set up a selection of more than a dozen different kinds of microphones, from omni to shotgun to parabolas, along with several stereo rigs. It was so cool to be able to put on headphones and test them all out. Sharon led the apparently famous “Build your own windscreen” workshop too. I’ve now got a shaggy shotgun windscreen that looks like a cross between an opossum and a giant hotdog! 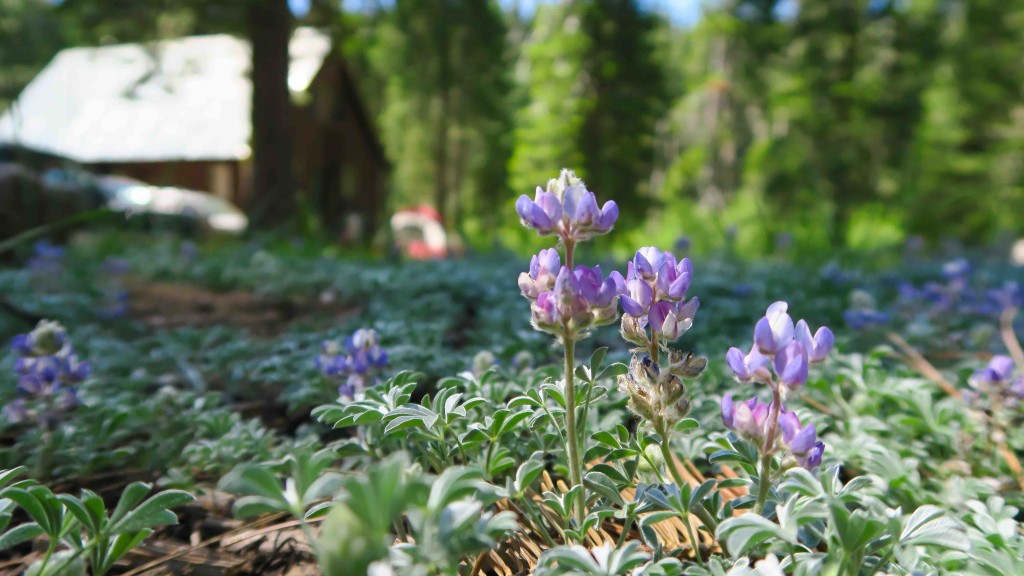 Lupines dot the ground around the field campus buildings

Of course most of the best parts were getting out to some beautiful spots to record. I’ll talk about that in Part 2.