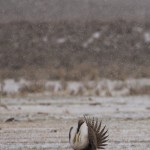 A male in the snow at Cottontail Lek.

I’m sitting at my desk, once again watching snow swirl outside the window and listening to the quiet churring of the electric heater. We’ve been getting about one snow storm per week- this is at least the fourth that we’ve had since late March. With the possible exception of Jessica Blickley’s 2009 season out here, we’ve never had this much winter weather, especially this late into the season. It’s often getting legitimately warm by this time in April (daytime highs in the 70’s), but not this year!

With less than two weeks left with the crew, the last few days look to be even more critical than usual. We’ve got a lot of the normal wrap-up still to do- calibrating the array and acoustic localization system, taking down the array, and proofing all of the field data would probably be enough to keep us busy. Add to that some new things for this year including the sagebrush sampling I alluded to in this earlier post, two photo analysis projects, plus all of the video analysis the crew has been doing to identify males on the lek tapes- now our schedule looks positively packed. 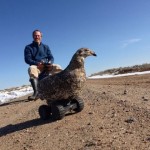 Gail snaps a photo of me learning to drive the robot.

Unfortunately this list still leaves off two of our main goals for the season– running our experiments with the robotic female Sage-Grouse, and testing out the encounternet telemetry tags. The robots are finally done, or at least very close to completed, and we are hoping the tags might be shipped to us this week. Once the snow melts, we’ll need to hit the ground running almost literally to practice for the experiments, catch a couple of males, and get all of the other things done. A big storm now could scuttle all of these plans, but thankfully this one seems to be fairly mild, and we may only end up with an inch or two that should hopefully melt quickly once the temperature climbs back above freezing.

The season has definitely been a challenge, and not just because of the weather (although the alternation between snow and mud, with few dry days in the cycle, have been frustrating for us). I mentioned in the mid-season update about the lower numbers of males we’ve had on the leks this year. This has been more than just an issue about monitoring enough birds to allow us to conduct statistical analyses.

Monument Lek, our long-term study lek, reached the point where males were abandoning their territories. We normally collect data on the whole lek at once, with video cameras filming all the males, and our field technicians adding notes of field locations so we can figure out which male is where on the video screen. We also place microphones in locations across the lek in order to record all the males simultaneously. Neither of these methods works very well when the males pull up stakes and display from different areas every day!

We have had to be flexible this year and change our strategy on Monument Lek. Rather than a “record everything” approach, we have shifted to a focal male approach, where every morning we’ve tried to target a few of the males displaying around the lek for video and audio recording. We’ve managed, for at least two or three days, to measure strut rates and get sounds from most of the “regulars” that stuck around the lek for the last half of the season. We also have some mating success data for these males. Although it isn’t ideal, we will have at least some continuity with our previous data for this lek. 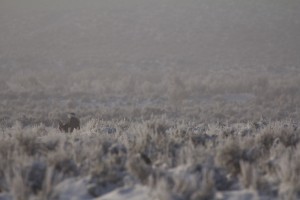 My last view of a grouse on Monument Lek this year may be one of these guys displaying in the sage far from the main clearing.

It’s hard to know what caused such a dramatic change on this lek, but I do have one (very speculative) hypothesis: lack of water. The main lek area features a prone tractor tire that is used as a water trough for the summer cattle. In most years, there is a puddle surrounding this tire, and sage-grouse of both sexes would visit this. Most females visiting the lek would walk from the northern corner down to the tire for a drink, and many of the top guys’ territories would either be near the tire or along this path of movement.

This explanation would fall under the hotspot hypothesis for lek evolution. This is one of several hypotheses put forward for why males would cluster together on a lek rather than pursuing other mating strategies such as, for example, remaining with one or more females (like most birds). The idea is that males are able to assess where the density of females is likely to be highest and several males will settle there. If there is a resource drawing the females in, they aren’t defending the resource itself, but instead are taking advantage of an area of increased female traffic.