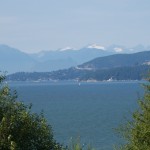 I’m back from Vancouver and the great joint meeting of many ornithological societies. Although there were a few issues, it was, all in all, a great meeting. The venue was beautiful; the University of British Columbia is perched on the end of a peninsula, with stunning views of water, mountains, and downtown Vancouver. The weather was pretty incredible as well: sunny and warm for most of the conference.

We had a packed schedule for the four-day meeting. We started at 8:30 with plenary talks from well-known biologists. In the opening plenary, Fiona Schmiegelow gave an overview of research on boreal songbird conservation. Unfortunately I missed the second plenary by Irby Lovette, but the last two were excellent: Roxanna Torres from UNAM led us through 20 years of research on color signaling in Blue-footed Boobies, and Peter Marra from the Smithsonian gave an impassioned plea for the importance of studying winter behavior in migrant birds, and the importance of linking breeding, migration, and wintering ecology.

The talks were all really high quality, not like it was 15 years ago when people were still transitioning into Powerpoint and presentations were still a mix of slides, overheads, and computer. There were 10(!) concurrent sessions, so at times it was a hard choice of which talk to attend. I think the ISBE meetings in Sweden drew away some of the bird song and behavior people. That said, I still saw a number of great talks on sexual selection, bird song, noise impacts, acoustic monitoring, genomics, life history trade-offs, color, and a number of other topics. Sometimes the most unusual talks are the ones that are most memorable- in this case I might give the award to the talk by Mu-Chun Yao (National Tawain University) on how the endangered Fairy Pitta uses monkey poo as a predator deterrent on its nest.

At 5PM, the talks ended and the poster sessions began. The room was fairly spacious for two hundred posters and hundreds of presenters and browsers, although some nights it was on the warm side. I felt pretty good about the response to our poster on lateral biases in sage-grouse behaviors- I was talking to people about it for the entire session on both nights my poster was up. I was hoping someone who specialized in brain asymmetry or behavioral lateralization might stop by to offer criticism or advice on publishing, but unfortunately that didn’t happen. It’s really hard to see every poster even when you aren’t standing their explaining your own, so I’m not terribly surprised.

A real highlight of the meeting was the Bird Band Jam- basically a concert at a local bar featuring several talented musicians from the conference.  I missed the first act, but caught a solo guitarist singing comical songs about birds and birding, then a wonderful sequence of bluegrass/Americana tunes that started with one group and slowly morphed over the course of several songs into another group. The night was capped by a more contemporary rock band that certainly got an A for effort. This was the first time I’ve seen this at a bird meeting (I know Ecological Society of America has something similar), and I think the consensus was to repeat this event in the future. 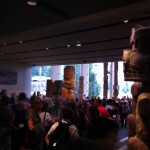 Closing Banquet in the Anthropology Museum

Meetings are always a good place to start up collaborations, and this one seemed particularly fruitful. I don’t know that I have anything to report right now but hopefully my conversations may have sparked a few projects that I will report on once they get a little closer to being concrete. 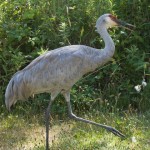 Meetings are also a good chance to catch up with old friends. I was pleased to run into four of my former sage-grouse assistants, including Conor Taff (now in our lab), Megan Jones (Florida State), Eli Rose (N.C. State), and the biggest blast from the past Jennifer Sheppard (U. Saskatchewan). I hadn’t seen Jenn since 2006 when she was part of our very first field crew in Wyoming. At that time she hadn’t even completed her undergraduate degree, so it was great to see her doing great work as a full fledged graduate student! I also got to see several former Acorn Woodpecker and Western Bluebird assistants from Hastings. Danika Kleiber is now in graduate school at UBC, and took Sarah Knutie, Lauryn Benedict and I to a waterfowl park south of Vancouver. We enjoyed getting EXTREMELY close looks at some neat birds like Cackling Goose and Sandhill Crane, which clearly warranted a celebratory fresh blueberry smoothie from a blueberry farm on the way back to Vancouver.

And again, congrats to Conor and Jim for their awards!