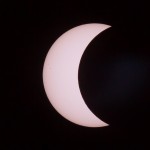 My eclipse story was almost one of regret. My home in the Bay Area was in a zone of about 70% totality and frequently foggy, so I thought I might miss the total eclipse entirely. I was yearning to see it at our sage-grouse site in Lander, which was just inside the band of total coverage. How magical would it be to be among my favorite Monument Draw rock formations or in the ancient petroglyph site at Castle Gardens when day turns to night?

Thankfully my dad had a plan. When he suggested a trip to South Carolina, I jumped at the opportunity!

We left in the morning the day before. Although it was less than 250 miles from Durham, we were concerned about the possibility of getting stuck in traffic or not being able to find a good viewing location once we got within the path of totality. The extra day also gave us a chance for a more relaxed drive down, allowing us time to explore a long-leaf pine forest in southern North Carolina border. This is a threatened, fire-dependent ecosystem characterized by towering pine trees and limited undergrowth. 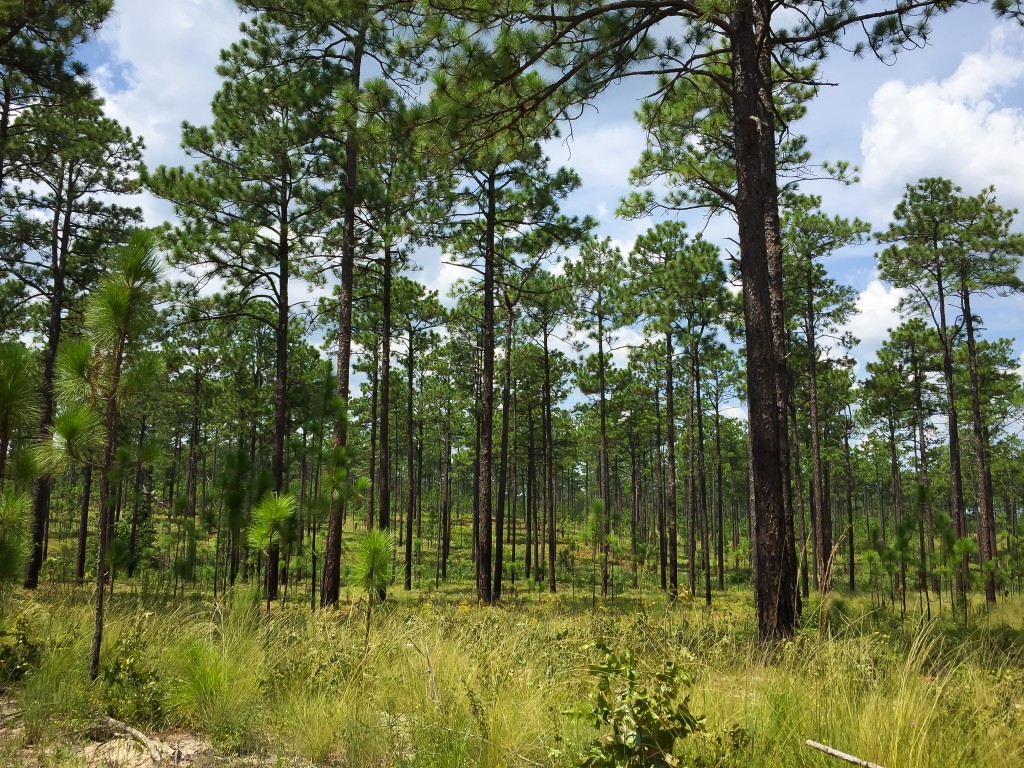 Since we took back roads on the way down, we didn’t hit much traffic before settling in for the night in Camden, South Carolina. Eschewing the “it’s just like Applebees” restaurant next door to the hotel, we found a surprisingly decent Mexican place just north of the Camden downtown. Eclipse morning, the breakfast zone in the Comfort Inn was full of excited groups sharing their viewing plans for the day. Many were headed to the fairgrounds in nearby Columbia, SC.  We checked the weather forecasts for the umpteenth time, decided no place within easy driving distance looked any more or less likely to have clear skies, and set out for on our initial target: Pointsette State Park.  Lynn selected this place since it was 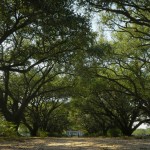 I couldn't resist stopping for a photo of this one. Nice driveway!

Our anticipation climbed as we drove south from Camden through small towns and past stately plantation houses. It was a couple of hours before the beginning of the eclipse, but a few people were already set up with tents and umbrellas in clearcuts in the state forest land outside of the park. We were not the first, but certainly not the last people in the park itself. After estimating about where the sun would be in the early afternoon, we found a place in the thin but growing crowd, and then concentrated on not melting in the brutal midday heat and humidity. 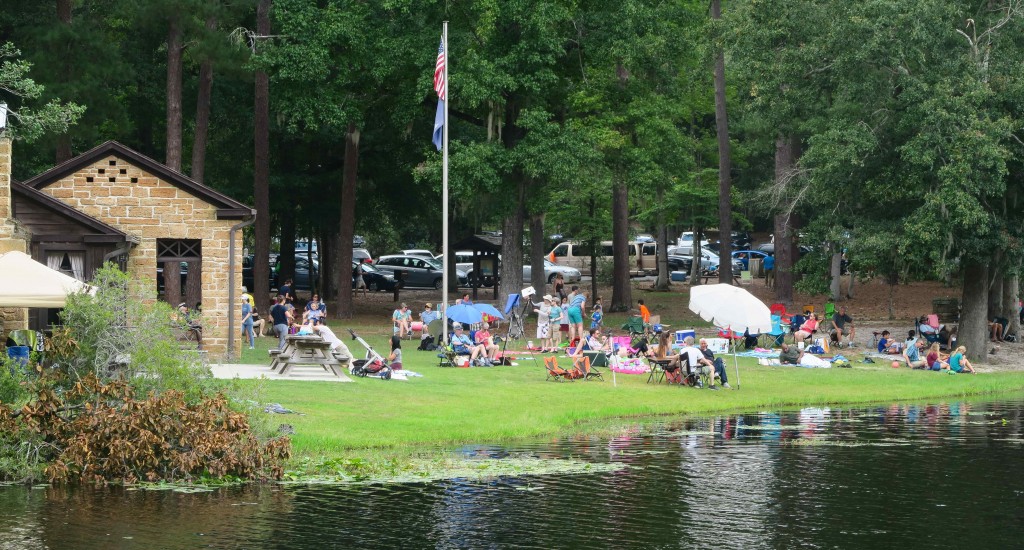 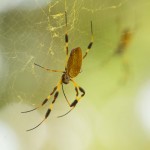 At one point I escaped to the shade of the woods, and an excited young lady pointed out these orb weaver spiders (probably genus Nephila).  Not much other wildlife with the exception of some butterflies and dragonflies. Other people swam or paddle-boarded in the lake, caught up on their reading in the shade, or played cornhole.

We had a typical summer sky- hazy, with scattered clouds. Although the cooling effect of a thunderhead covering the sun was welcome, it made us a little nervous about the eclipse. What if we drove all this way and couldn’t see anything? 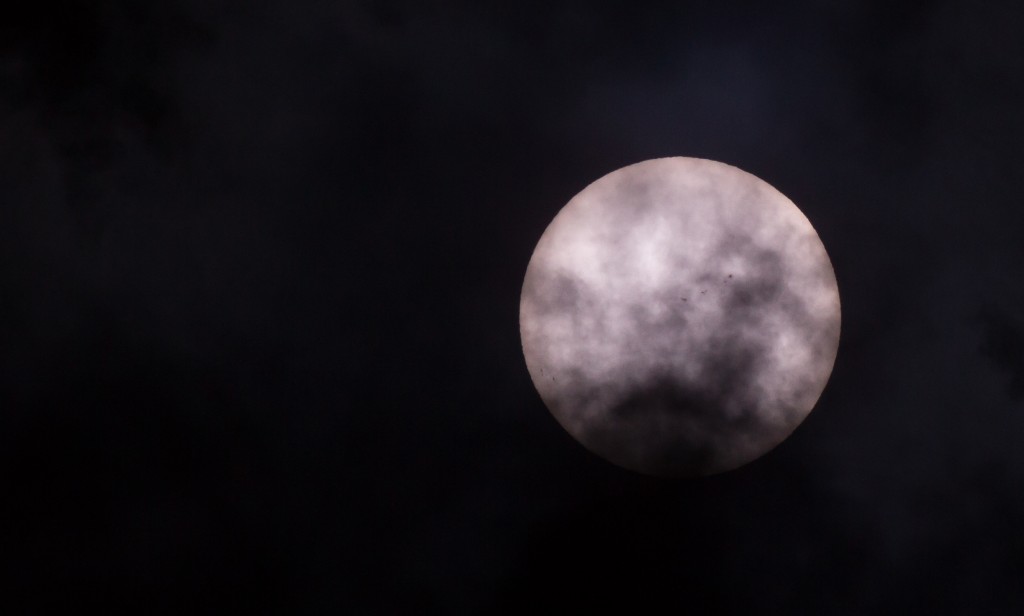 A few sunspots visible through the cloudcover

Some time after 1PM, I stepped back to my camera setup and re-centered the sun in the viewfinder. Wait, is that a little nibble! It has begun! My cries of “It’s happening” caused folks to don their solar glasses and peer skyward. 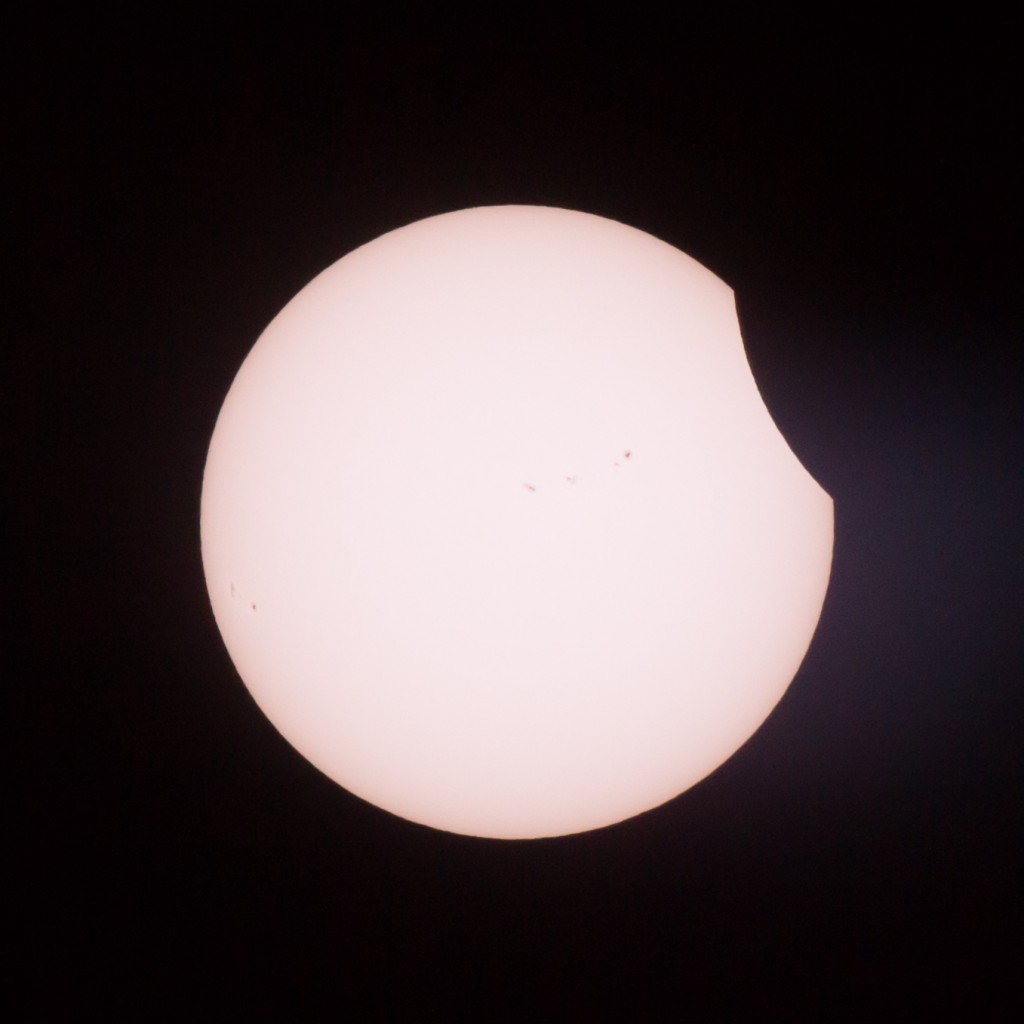 Of course, there is a long way to go between nibble and totality. The day stayed sunny and hot. Many folks returned to their blankets or spots of shade. Others were drawn to the small pinhole images of the eclipse you could see projected on the ground. My dad planned ahead and brought a colander, which was a huge hit! 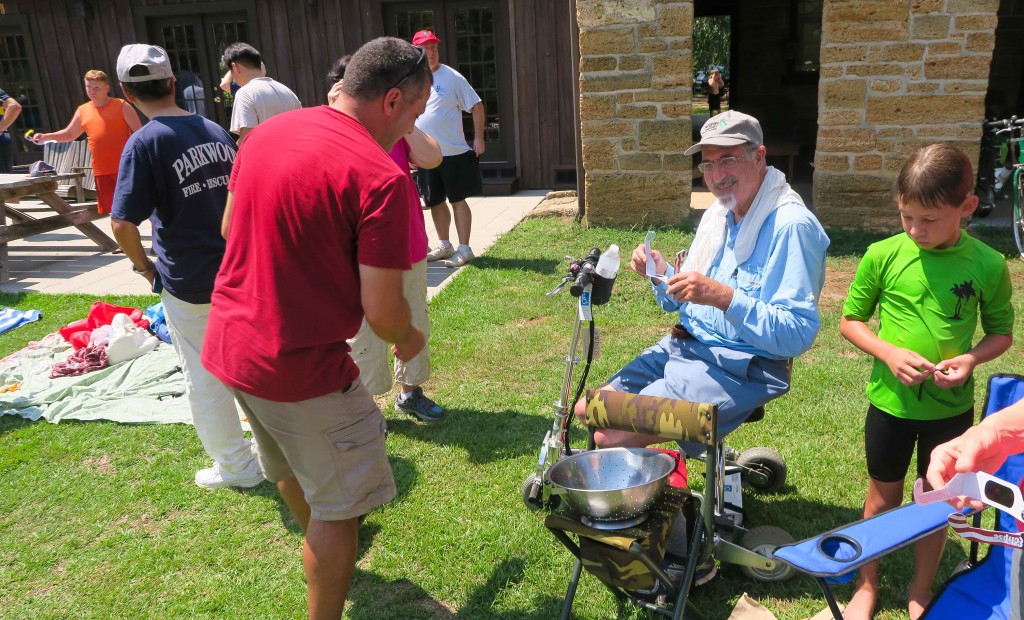 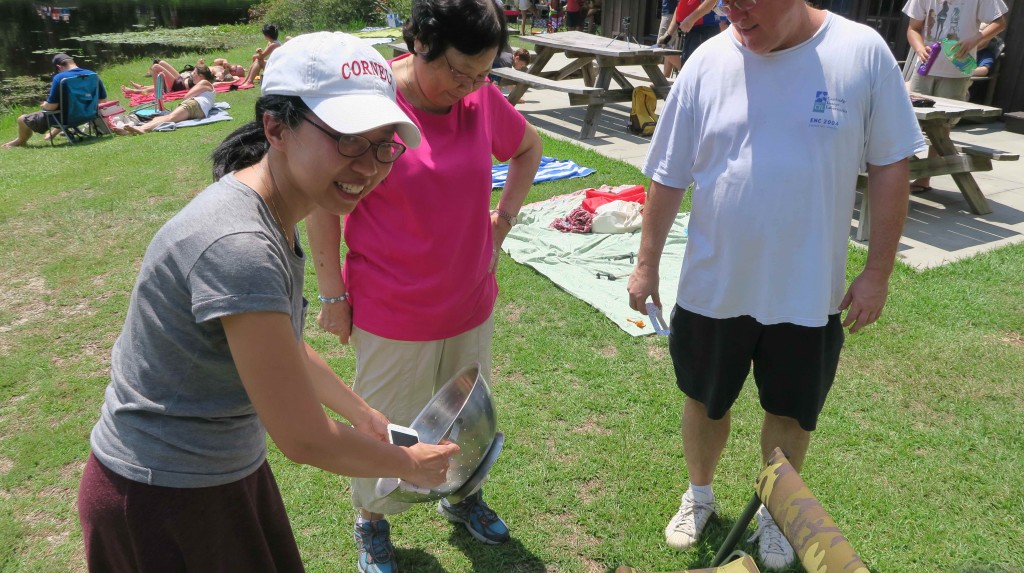 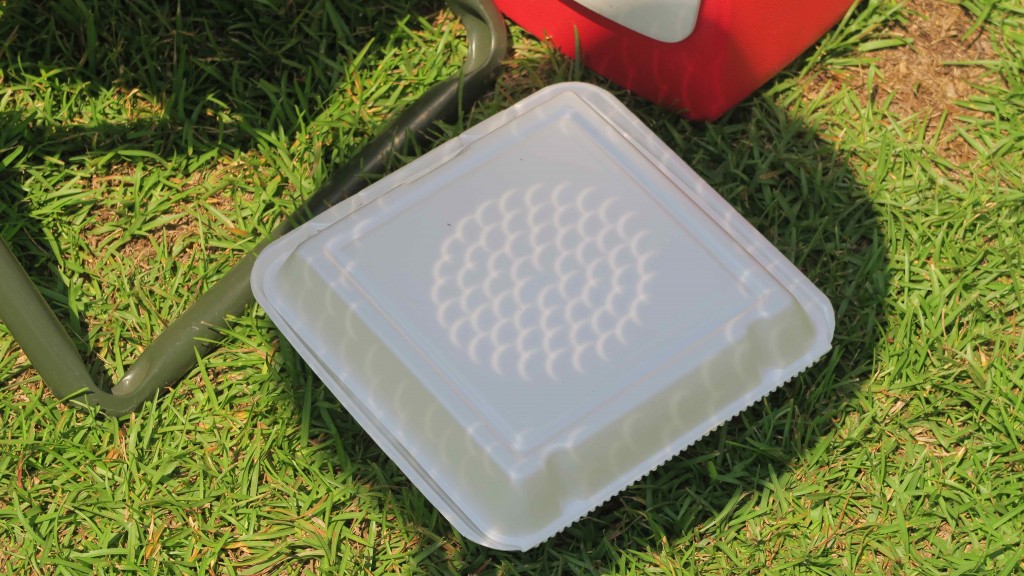 Eventually somewhere around 75% coverage we started commenting on how the sunlight light was a little dimmer and the temperature was coming down a bit. The passage of time felt a little funny to me, both crawling and racing towards totality. It continued to grow darker and cooler and at last the final sliver of the sun zipped away. 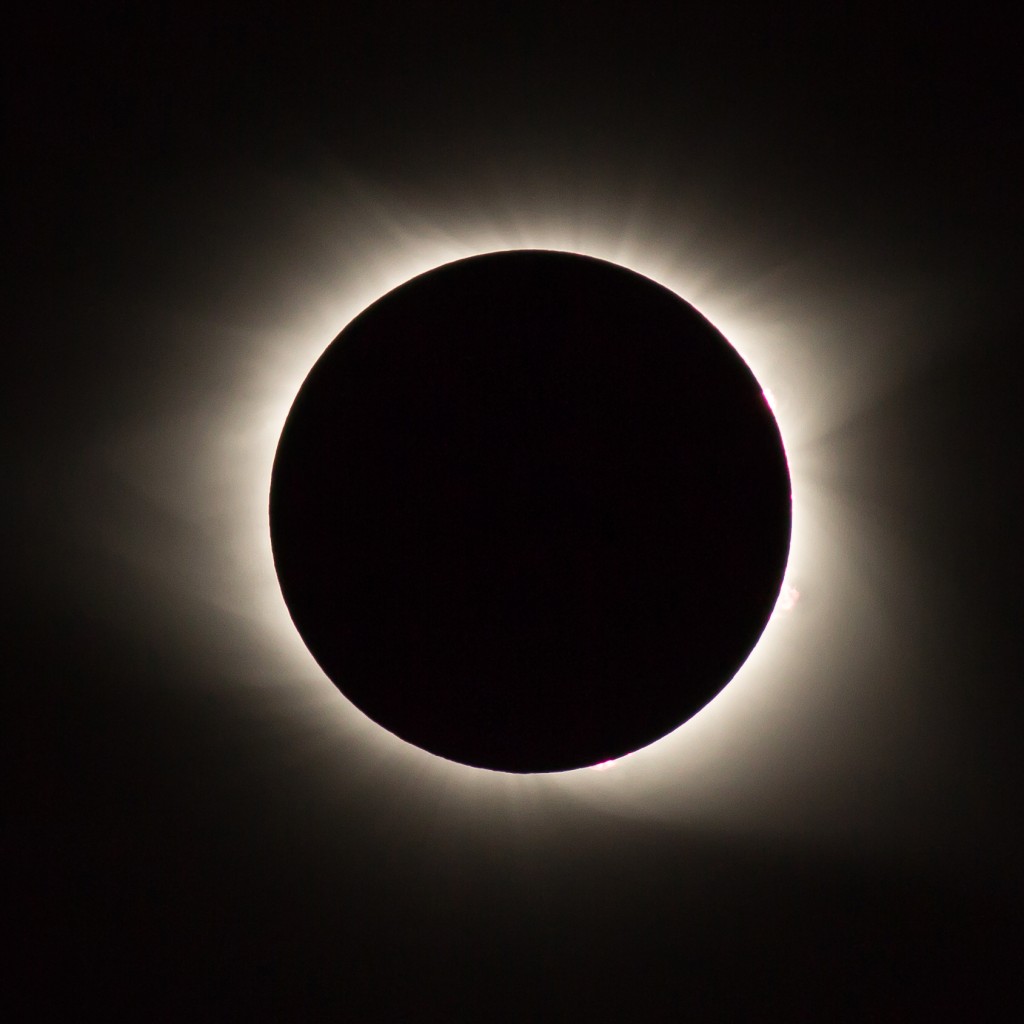 Totality! There was a gasp, then a cheer from the crowd. The sky now looked like dusk, but lighter all around the horizon. It reminded me of late night at Toolik Field Station above the Arctic Circle, where the light lingers and seems to come from everywhere and nowhere at once. A few stars or planets peaked out in the deeply dark blue sky. And the corona! The black disk of the moon was now wreathed in a silvery aura. The strange and sudden darkness, the eerie twilight quality of the light, the beautiful foreign object that replaced the familiar sun… Amazing. Absolutely amazing. It is really challenging to put into words how unreal and joyous this moment was, and in the back of my mind I thought about how utterly unnerving this would feel if one were not expecting it.

We heard a few katydids call. In what seemed like 10 seconds and 10 minutes, the moon finally crossed to the other side and the sun flared back. The light was still quite dim, with the quality of a single bright but distant street light. 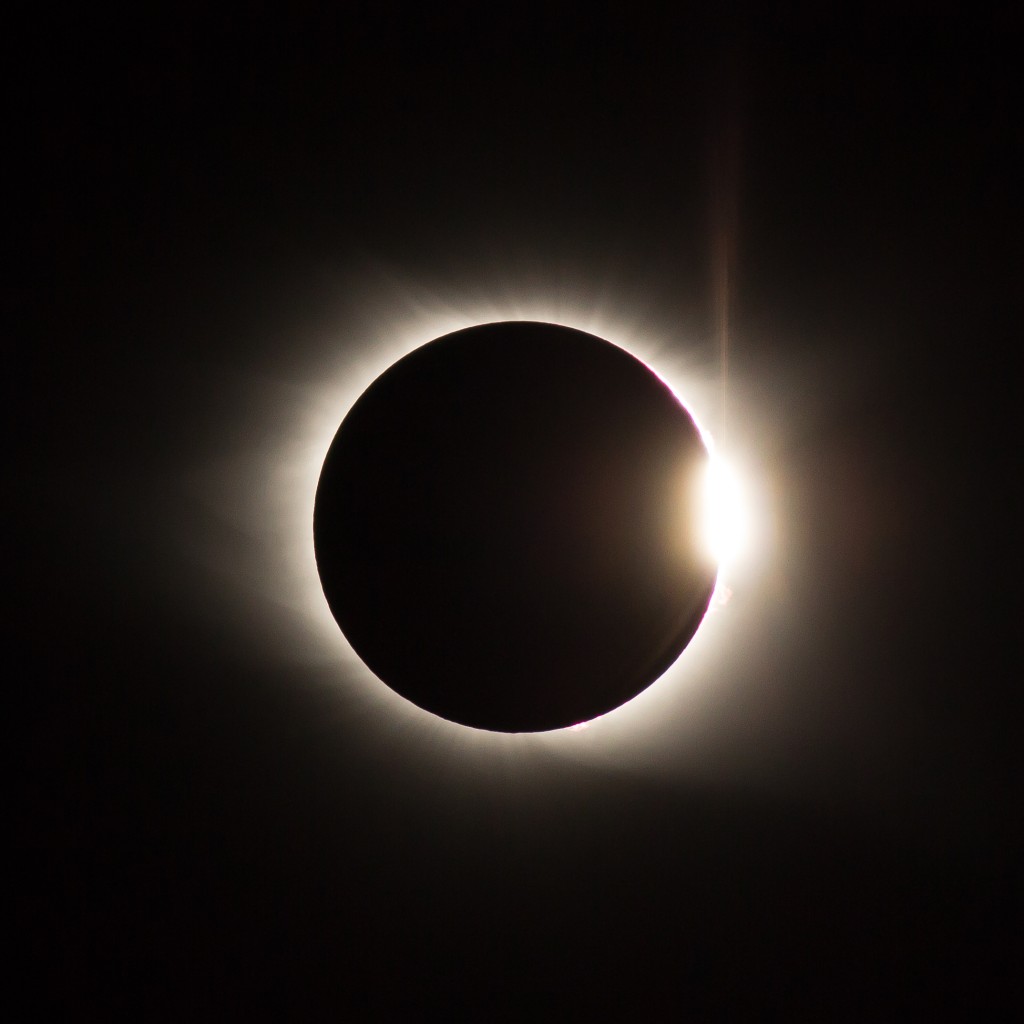 The spell broken, people chatted excitedly while packing up, many exchanging contact info to share photos and video of the event. While we did the same, I looked overhead and noticed the sky (still with a partial eclipse) now populated with chimney swifts and barn swallows. I didn’t notice any of these aerial insectivores before the eclipse started, so it could be they were triggered to emerge and start foraging by eclipse conditions. I didn’t keep careful enough notes to add to citizen science projects like the one on iNaturalist, but hopefully other eclipse watchers around the country were able to document potential responses such as this.

I don’t know what the interstates were like, but our plan to use back roads did not work quite as smoothly on the way back. We encountered delays approaching pretty much every small town with either a traffic light or stop sign. After a stop for dinner at an Irish pub in Southern Pines, we made it back to Durham by about 9 o’clock. Thus ended our eclipse adventure, although the memories will be with me for the rest of my life.

If you missed this total eclipse, please make every effort to get to the next one on April 8, 2024. I can’t overstate how special this was, nor how big of a difference even high-90% occlusion is from totality.

I’ve got a few more photos in a public Flickr album here.

Also, I’ve written up some technical discussion on how I took the photos in separate post.