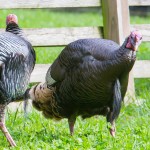 Wild turkeys occasionally do goofy things, and when someone captures that behavior on video, I sometimes get contacted to try to make sense of it all. This happened last week, when a video of a flock of turkeys walking in a circle in the middle of the street around a dead cat went viral. I was quoted in articles at a website called the Verge, as well as NPR and Fox News.

About the video- which shows a flock of more than a dozen turkeys walking slowly, clockwise, at a distance of a few meters from a road-killed cat. There are a few aspects to consider:

Why do they care about a dead cat?  My thought on this is that the behavior looks like predator inspection behavior. This is a reaction to learn about a predator that does not pose an immediate danger (as a sprinting carnivore or soaring/diving eagle might). The behavior we see in the video indicates the turkeys are attentive to the roadkill, but nervous about it (keeping their distance, and also staying in motion so that they can flee more quickly). This behavior could do a few things. They could gain additional information about this particular predator (is it sleeping, will it wake up, is it about to pounce). The inspection could ensure everyone in the flock sees it and in particular that younger birds can learn about potential danger. Finally, this kind of behavior would alert a predator that they are discovered, and that an ambush attack is unlikely to be successful. For this last possibility, it resembles mobbing behavior that is found in a variety of species.

I’ve seen somewhat similar behavior when a coyote approached a flock of turkeys. The flock was alert and alarm calling, and parted as the coyote walked through. They seemed to want to keep an eye on the predator while not getting too close.

A slightly different version of this is that the turkeys may see the dead cat as something unusual and novel in their home range. Thus it could be that they don’t start by knowing the cat is a predator (or similar enough to natural predators like bobcats), but instead are inspecting to find out the danger level of this new thing they’ve stumbled across. Functionally this would be pretty similar to what I describe above.

Why are they moving in a circle?  Probably the oddest thing about this video is not that the birds care about a dead cat, but rather the eerie sight of them walking in a circle. I think there are two parts to this. First, their movements are governed by the tension between wanting to observe the cat, but also being fearful of it, which results in remaining motion but at a relatively fixed distance from the cat. Too far, and they couldn’t see what’s going on, but a closer approach may be risky if the cat is a crouched bobcat instead of a dead housecat.

When turkeys are foraging they often spread out, but if they are just walking from place to place, they may move in single file. This follow the leader behavior may have something to do with the circling behavior as well. In particular, I think the size of this flock of turkeys was coincidentally perfect to create a perpetual circling motion of the flock. Possibly as the first bird continued the circular trajectory around the cat, it caught up to the last bird, who was just arriving to inspect the cat. The effect would be like the head of a conga line catching up and starting to follow the person at the end of the train.

I’ll note that for whatever reason, turkeys seem to have a propensity to get stuck in these circular movement loops. I’ve seen (in person and on youtube) fairly persistent circling behavior in much smaller groups of male turkeys exhibiting various forms of chasing or aggression.

How does this relate to other animal “funeral” and “mourning” behavior? This is a big topic and I’m not going to attempt to review everything here. Some birds are known to have “funerals”– mainly corvids like crows and magpies. My former labmate Teresa Iglesias studied ‘cacaphonous aggregations’ of scrub jays in response to the presence of a dead jay. In a lengthy set of experiments, she compiled evidence that the response to the dead jay is similar in some ways to the response to a predator, and that the behavior of recruiting other jays is likely related to the potential cue of risk that a dead jay provides. I don’t mean to suggest all such mourning behavior in animals falls under this hypothesis, but I do think it shares similarities with the behavior we see in the turkeys.

Of note- I AM ALWAYS INTERESTED IN SEEING THESE VIDEOS, AND THERE ARE VARIOUS QUESTIONS THAT COULD BE ANSWERED WITH ENOUGH EXAMPLES, SO PLEASE FEEL FREE TO ALERT ME ABOUT ANY NEW VIDEOS THAT YOU SEE.