In my last post, I talked about the usefulness of our robotic grouse for studying complex social interactions on the lek. This week we tried another method for modifying a male’s social experience– audio playback. 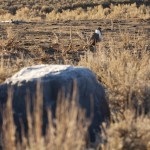 We have a long history of playing back sounds to the Sage-Grouse. For the first several years our basic behavior studies were running along side the ‘Noise Project’, an extensive research program into the effects of noise associated with energy development on the grouse. The centerpiece of the Noise Project was playing back the sounds of two common noise sources (drilling sounds and road noise) from the Pinedale Anticline/Upper Green River area.  We used fake rock speakers, possibly the same kinds you might have seen in a SkyMall catalog, to play these sounds at leks, and compare how many birds showed up and their behavior between the noisy leks and control leks that had. I’ll talk more about the results from this project in a future post.

We also used the speakers in 2011, this time as part of the basic behavioral research program. We’ve been interested in the importance of “courtship skills” in the males, and part of that is how attuned males are to changes in their social environment. Does a male change his courtship behavior a lot when a female gets closer, or not very much? Our first experiment with the fembot showed this was related to the success a male has in courting females. 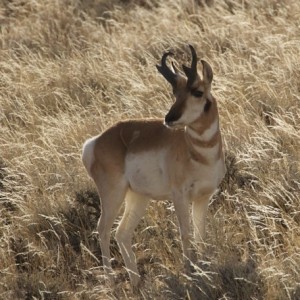 One species used in our 2011 playback study: Pronghorn

Our experiment in 2011 was designed to look at another dimension of responsiveness- how attuned are males to the threat of potential predators? Here we chose alarm calls o f three different species that live with the sage-grouse: ravens, killdeer, and pronghorn antelope. We played these from the rock speakers and measured the strength of the grouses’ reaction, as well as how long it took them to resume their original behavior. Analysis is ongoing, so we don’t yet know how this sort of “ecological” responsiveness relates to their social responsiveness or their success on the lek.

Fast forward to 2013, and we’ve set up the speakers once again, this time to measure how males respond to other males. It would be great to have a robotic male, but as you can imagine, making a mechanical male that is realistic enough to give a convincing display would be a steep technical challenge (never mind making one sturdy enough to withstand an attacking male). Instead, we are playing back the sounds of male struts from the rock speakers to see how males respond to a simulated male at the edge of the lek.  Anna has been putting together recordings with different call rates, so we can see if they are attuned to differences in the signals that males may be sending out. We’ve only just begun, but this will hopefully allow us to collect some interesting data on how males respond to other males while Gail puts together the new fleet of robots. 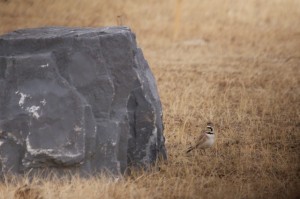 In other news, we observed the first copulation of the season yesterday! The breeding season has officially begun. Our earliest observation ever was on March 19th (in two different years), so we are on the early end of things.

Jessica Blickley’s Conservation Biology paper on the impact of chronic anthropogenic noise on sage-grouse took over 18 months to go through review. Thankfully our more recent paper proceeded much more quickly, in fact, it just came out. May I present: Experimental Chronic Noise Is Related to Elevated Fecal Corticosteroid Metabolites in Lekking Male Greater Sage-Grouse (Centrocercus urophasianus). This is in the journal PLoS One (PLoS = Public Library of Science, one of the first Open Access journals that charge a bit more for publishing but make the content freely available to everyone). The paper asks whether we can detect differences in traces of stress hormones in the poop of grouse that were on leks exposed to chronic noise versus control leks without the extra noise. The answer is yes, but like many things in science, the answer becomes a bit more complicated when you look at the details, or try to figure out what the results you find actually mean. There was a difference in the average level of corticosterone metabolites, but this wasn’t diagnostic. Additionally, it didn’t matter how close to the speakers the poop (and presumably the males) was, so the differences were shared across the entire lek. Still, further evidence that noise impacts are serious business for birds like sage-grouse, and are something management plans may want to take into account.

Jessica has another paper that just came out- this as the product of a seminar she took a couple of years ago. She and her colleagues put together a survey of job ads and questionnaires of people in charge of hiring conservation professionals- both to try to decode what skills ads are really asking for, and also to identify skills that graduate students might not get in the course of a “normal” PhD (whatever that is). It should be a really useful paper, and I’ll be sure to add it to one of the resources pages here next time I update those. So check out: Graduate Student’s Guide to Necessary Skills for Nonacademic Conservation Careers in Conservation Biology.

We’ve made some progress on several other fronts as well. We’ve gotten several other papers submitted, including a detailed look at fighting dynamics in male sage-grouse that I believe is our first paper making use of the high-speed video of male behavior. Another project we’ve gotten off of our desks is a characterization of the mechanical sounds in the sage-grouse, lead-authored by former undergrad and technician Becca Koch (now in a PhD program at Auburn). Gail and I also contributed to a paper on the negative effects of necklace-style transmitters in male-sage-grouse that included the acoustic analysis of one collared male with odd sounding displays. We have a few other manuscripts perched like baby birds at the nest hole, waiting to take that brave leap into the wide world of academic publishing. We should have at least one more paper make that leap before the end of the year. Big thanks to Gail for using much of her sabbatical to contend with some of this.

In other news, teaching is still the big focus, although I can’t believe how quickly it has gone. Only 4 more lectures in the quarter! I’m done with my other lectures for the time being (my City College of San Francisco seminar was on the previous Friday), but I’ve got several lectures, seminars, and meetings lined up for early in the new year including. 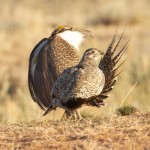 At long last (~18months after first submission), Jessica’s paper detailing the multi-year noise introduction experiment has finally been published. Those with institutional access to Conservation Biology can get it here. The paper compares maximum lek attendance of males and females at leks with and without experimentally introduced noise, and found that relatively modest and localized noise sources were enough to cause declines. Two types of noise were used- relatively constant drilling noise, and less predictable truck noise. Somewhat surprisingly, truck noise, although it was intermittent and had a much lower mean amplitude over long periods, was associated with higher declines than the drilling noise.

Having seen the truly Herculean effort it took Diane and Jessica to actually execute this study in the field, and knowing how important it is to have this paper out there while new sage-grouse management plans are being drafted, I’m super excited to see this finally in print. Congrats Jessica, Diane, and Gail! 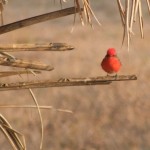 Last month the Patricelli Lab gained a new member- welcome Alejandro Rios-Chelen. Alejandro is a postdoc who did his PhD and a previous postdoc at UNAM in Mexico City. His earlier work includes studies of one of my favorite birds, the Vermilion Flycatcher (Pyrocephalus rubinus). He has looked at various aspects of song plasticity in this species, and in yesterday’s lab meeting took the opportunity to tell us about a study on the effects of urban noise on flycatcher song. It was a really elegant project- investigating variation both within males and between males in song characteristics such as number of song elements and frequency measures- and using simultaneous measures of background noise to help explain this variation. If I had a time machine, I think I would reconsider how we collected data in our meadowlark project.