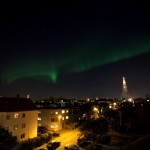 After the workshop was complete, it was time for the main event- the 13 International Grouse Symposium! This conference brings together grouse specialists from all over the globe once ever three years. It’s an interesting interval, for example the Behavioral Ecology meetings are held every other year, while the International Ornithological Congress is every 4th. I suppose three years is a compromise between keeping momentum and maintaining contacts versus making sure there are new stories to tell. IGS had around 150 attendees, mostly from Europe and North America although a few from Asia as well. The next one is planned for Utah in 2018.

The topics on display at the IGS were pretty wide ranging. My talk was pretty far on the basic science/non-applied side (it was on reproductive skew on the leks), but people definitely seemed interested. As we learned from Ilse Storch, head of the red list committee for grouse at IUCN, almost every grouse species is in trouble, and things haven’t gotten better in the past decade. That means most of the talks were management and conservation oriented. There were a lot of really sophisticated spatial analyses dealing with how birds are dealing with changing landscapes. On the other end of the spectrum, there were some presentations on husbandry in some of the most threatened grouse populations. Greater Sage-grouse were probably the most talked about species, and I think more than half of the conference focused on one of the prairie grouse species. Some of the Europeans were heard lamenting “Wow- you guys sure do have a lot of money for research!”.

With such a small meeting spread over three days, there was only one talk at a time. This is in contrast to some of the bigger meetings where you are always missing something because invariably multiple interesting talks are lined up against each other, or the concurrent sessions occur far enough apart it’s not easy to jump between rooms. It was nice to be able to catch everything, and to get to hear some really interesting presentations that I might not normally have gone to.

For what it’s worth, a discussion with Tomas Willebrand convinced me to pick up my twitter and I did a little bit of live-tweeting of some of the talks.  I’m a relatively new Twitter convert, so this was the first meeting I had a chance to do that. It was pretty fun to think of short summaries of the presentations, although I don’t think I was as rigorous as some biotweeps who seem to come up with multiple entries for each and every talk.

The venue was at the Hilton near downtown Reykjavik. One highlight of the conference was an elegant banquet on an island just north of the city, in what was supposedly one of the oldest wooden structures on Iceland. 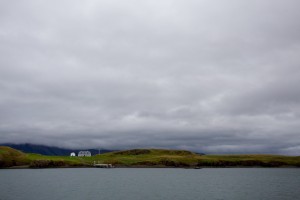 Taking the ferrry to the conference banquet 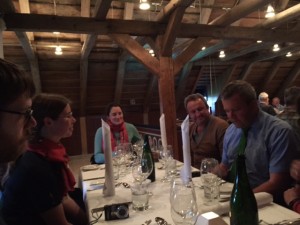 Anna, Peter, and Alicia getting entertained by some Dutch researchers 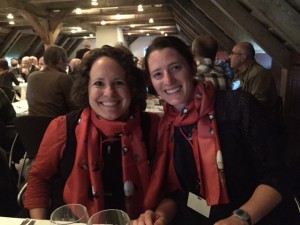 Gail and Marcella showing off their new grouse scarves.

Another highlight was getting to chat with Jacob Höglund, one of the authors of THE book on leks. Very cool to geek out about the differences between Black Grouse and Sage-grouse with one of the giants of behavioral ecology and someone who’s been studying grouse behavior (among other things) for many years. 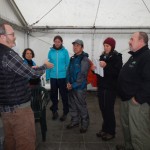 This will be the first of three updates focusing on my recent trip to Iceland for the 13th International Grouse Symposium. I definitely want to thank my collaborator Jen Forbey (Boise State) for this wonderful opportunity. She provided the inspiration (and a whole lot of administration) to put together a workshop on the day before the conference. The theme was how new technology can help us meet management challenges for grouse. In essence, we were able to show off a lot of tools that many biologists have not gotten to see in action. 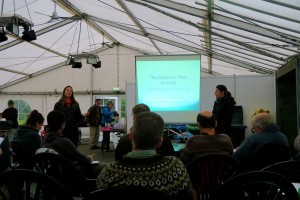 We arrived in Reykjavik a couple of days before the workshop so we could prepare. We had five groups presenting at the workshop, including aerial mapping using a helicopter drone, terrestrial laser scanning, an “e-nose” chemical sensing device, and a field spectrophotometer for measuring plant characteristcs. Gail and I had a dual station- she shipped the robot and I brought the Encounternet system. Some of the stations went through dry runs at the venue, a small zoo/park in downtown Reykjavik, while the rest of us polished our presentations. 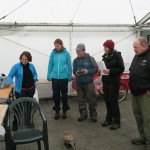 Just like real field work, our careful planning lasted until it didn’t. On the day of the workshop we had periods of intense rain and wind. After our initial introductory comments, Gail and I, as well as Donna the drone expert, remained in the tent area. Groups of workshop attendees rotated through the various stations. I think we were a popular one in part because we were inside and next to the coffee! 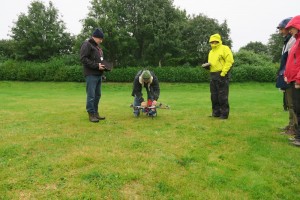 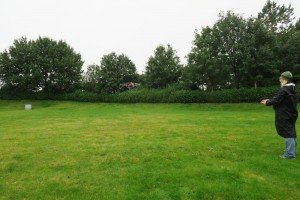 Donna Delparte takes advantage of a break in the rain to provide a demonstration of the aerial mapping using a copter drone.

We were certainly popular with this uninvited guest. 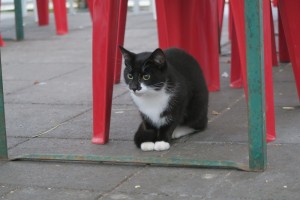 All in all it was an interesting workshop for everyone- I certainly learned a lot about some of the great new tools coming on-line now.

A brief (and tardy) note of congratulations to two of the students in our lab – Tawny and Marty, who both presented at this year’s Undergraduate Research Conference. Tawny is working on a senior practicum,  and has been investigating lateral biases in aggressive behaviors in the sage-grouse. Marty came in last summer through a special research program (the FASTRAC program), and has been looking at male responses to robot females presenting either interested or disinterested behaviors.

You can check out an article about it here. Gail and Tawny were both interviewed for this article!

For those of you in the Davis area, I’d like to point out a couple of great events coming up next weekend (Feb 23rd). 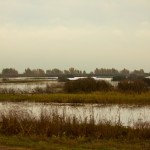 If you’re looking for something out of doors, nearby Yolo Bypass Wildlife Area is hosting the annual Duck Days bird celebration. YBWA sits just off I-80 along the causeway into Sacramento. It’s a fantastic place to see wildlife at pretty much any time of year. It’s also somewhere we’ve taken out-of-town speakers to go birding, and even done some sound recording for various projects in the lab (generally projects involving birds coping with traffic noise). For a nice write up about Duck Days in the Daily Aggie, click here.

The second event is the UC Davis Regional Animal Behavior Student Conference. Every other year, the symposium is opened up to students from other northern California schools, leading to a fantastic mix of talks and a fun opportunity for local behavioral biologists to get to meet each other. I can take a tiny bit of credit for spurring this along- I had attended a similar meeting in Southern California (the Southern California Animal Behavior, or SCAB, conference) while I was finishing up at Berkeley, and was hoping to replicate something like that here. I floated the idea to some faculty at Davis, and basically got the reaction: “Why would we need to invite people in, we’ve got such a great program here!?” Fortunately a couple of years later the students in ABGG were deciding what to do with a modest budget surplus, and I floated the idea of expanding their annual research conference to include nearby schools. Anyway, it’s a great chance to hear about cutting-edge research from the best and brightest at UC Davis and elsewhere.

Early January was pleasantly busy. It started with the SICB (Society for Integrative and Comparative Biology) meeting held in San Francisco. This was my first SICB, and I was really impressed. It was one of those meetings where you really learned a lot, whether it was cutting edge techniques or fascinating studies on all sorts of organisms (or, most likely, both at once). I’ve usually been to meetings that either focused on birds, or else more narrowly on the sorts of animals (fish, insects, birds, mammals) that are typically featured at animal behavior meetings. SICB really does have everything from fossils to enzyme activity in symbiotic bacteria to bird phylogeography. It’s also very student friendly- as much or moreso than Animal Behavior Society. I’ll heap on one more point of praise- the poster sessions were fairly well run, with plenty of space to get around. This is something almost every meeting does wrong by packing too many posters into to small a space.

I presented the more-or-less final version of the laterality study, and people seemed pretty interested in it. 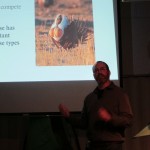 I left SICB early to head down to Monterey where I was scheduled to speak to the Monterey Peninsula Audubon Society. This was a fun opportunity; one of my first public lectures as a graduate student was to this same group more than 10 years ago. I was reminiscing about that talk, and how that was in the era when people were starting to give Powerpoint presentations on the computer (rather than getting slides developed), but nobody actually had projectors yet. I showed up not knowing that if I wanted to give a talk from the computer I needed to bring my own projector! I managed to come up with an improvised solution- they did have a media projector that accepted composite input, and I happened to have a video camera from my field studies in my car, so I was able to film my laptop screen with a hi-8 camera. Not ideal, but better than not having any AV at all!

Maybe somewhat appropriately, we had a bit of a scramble to get the audio speakers set up this time around as well, but it all worked out. The audience seemed to enjoy the talk and especially the high speed video of the grouse displays. Folks kept me there for a long time with great questions, and apparently I was even on public access TV. I even got to meet the mother and father-in-law of Marc Dantzker, one of our collaborators.

Of course no trip to Monterey is complete without a stop at the Monterey Bay Aquarium. Even with the sea otter exhibit closed for construction and no mola mola in the big Outer Bay tank, it’s still a magical place to go. I’m sure I’m not alone in this thought: standing in the dark watching the jellyfish or big tuna tank is almost a religious experience.

I’ve been to the aquarium several times, and each time there’s something new to see. I think my favorite part was getting an up close look at a Laysan Albatross that some handlers brought out in front of the kelp tank. I also had fun using my new macro lens to get photos of shorebirds in the aviary. 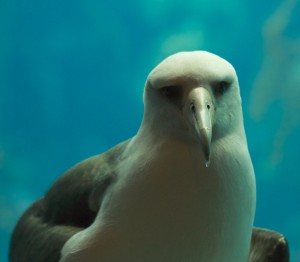 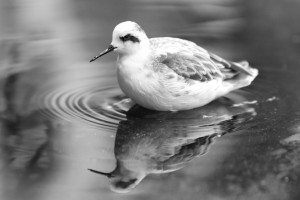 Although we missed up close looks at sea otters at the aquarium, we did see them several places along the coast there, including some really nice looks right by the wharf in downtown Monterey. 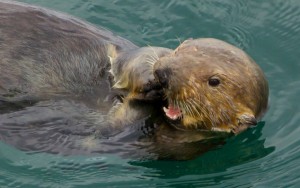